Earlier this week, Towleroad reported that both Texas and Mississippi were refusing to comply with orders from the Pentagon to begin offering partner benefits to troops with same-sex spouses, based on state laws banning same-sex marriage. 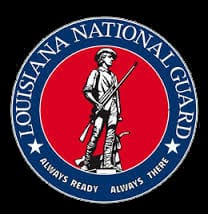 Now Louisiana has joined them:

The Louisiana National Guard won't process benefits for same-sex couples because the state Constitution does not recognize gay marriage, a spokesman confirmed Wednesday. The directive directly contradicts a Pentagon policy issued Tuesday requiring the military to honor such benefits requests.

"The state of Louisiana does not recognize same-sex marriage, nor does it allow a state officials to take part in an act that recognizes same-sex marriage. We would refer those individuals interested in applying for such benefits to seek guidance at a federal military installation," said Lt. Col. Michael Kazmierzak.

An amendment to the Louisiana Constitution, passed in 2004, states marriage "shall consist only of the union of one man and one woman." Any status "identical or substantially similar to that of marriage for unmarried individuals shall not be valid or recognized."

Alabama said on Wednesday that it would comply even though its state law bans same-sex marriage.