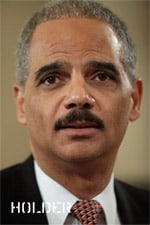 In a letter dated Sept. 4, U.S. Attorney Eric Holder notifies U.S. House Speaker John Boehner (R-Ohio) of the change in the way the Justice Department will enforce Title 38 of the U.S. code.

“[I]n light of subsequent developments and my recommendation, the President has directed the Executive Branch to cease enforcement of Sections 101(3) and 101(31) of Title 38,” Holder writes. “Decisions by the Executive Branch not to enforce federal laws are appropriately rare. Nonetheless, for the reasons described below, the unique circumstances here warrant non-enforcement.”

Holder said last year that the Justice Department would no longer defend Title 38 in court. But Wednesday’s announcement went even further, with DOJ finding that the legal basis laid out by the Supreme Court in the DOMA decision should nullify the marriage definition in the provision. Secretary of Veterans Affairs Eric Shinseki said just last week that the spouses of gay veterans weren’t eligible for benefits because no court had found Title 38’s definitions to be unconstitutional.

Writes the White House in a press release:

The new policy means that the administration will no longer enforce statutory language governing the Veterans Administration (VA) and the Department of Defense (DoD) that restricts the awarding of spousal benefits to opposite-sex marriages only. The language, contained within Title 38 of the U.S. Code, has, until now, prevented the Executive Branch from providing spousal benefits to veterans—and in some instances active-duty service members and reservists—who are in same-sex marriages recognized under state law.

In a letter to Congressional leaders, Holder stated that the President’s decision was consistent with the Court’s decision in Windsor in June.

“Although the Supreme Court did not directly address the constitutionality of the Title 38 provisions in Windsor, the reasoning of the opinion strongly supports the conclusion that those provisions are unconstitutional under the Fifth Amendment,” Holder wrote.

The decision not to enforce Title 38 aligns with the Obama administration’s determination last year that two provisions of Title 38 that govern benefits for veterans and their families were unconstitutional as applied to legally married same-sex couples. At that time, the Attorney General informed Congress that the Department would no longer defend the Title 38 provisions, but that the Executive Branch would continue to enforce them. Today’s announcement makes clear that enforcement of the provision in Title 38 defining marriage as between a man and a woman will now cease.