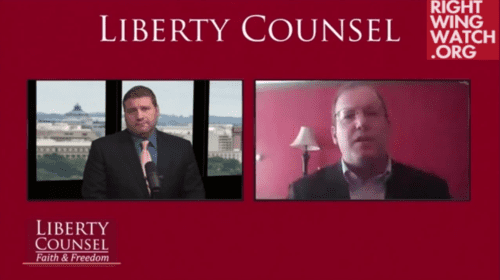 Peter LaBarbera, president of 'Americans for Truth About Homosexuality', joined Matt Barber on Liberty Counsel's "Faith and Freedom" radio show to discuss the threat of homosexuals in America. As usual, his claims amounted to nothing but offensive sound bites.

Saying that gay activists desperately "want approval for their lifestyle," LaBarbera was outraged that they are now using the government to "encourage and celebrate sin," so much so that "now they want to attach the sin of Sodom to marriage."

Approvingly quoting another anti-gay activist, LaBarbera declared that "it's almost as if homosexual sodomy was created to spread disease; that's how dangerous and unnatural this lifestyle is."

"When a nation embraces such confusion and such evil," LaBarbera warned, "it is on a moral decline."

Watch the hate-spewing, AFTER THE JUMP…