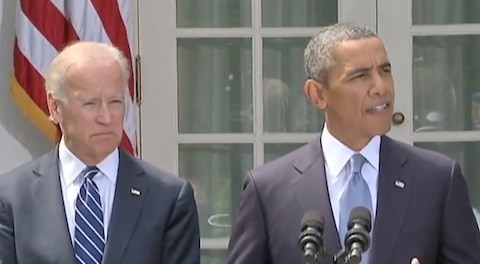 Yesterday in a White House press conference with Joe Biden at his side, President Obama expressed is outrage at Syria's use of chemical weapons and said that he would take the case for military action to the American people and the world, but most importantly, seek approval from Congress:

Now, after careful deliberation, I have decided that the United States should take military action against Syrian regime targets. This would not be an open-ended intervention. We would not put boots on the ground. Instead, our action would be designed to be limited in duration and scope. But I'm confident we can hold the Assad regime accountable for their use of chemical weapons, deter this kind of behavior, and degrade their capacity to carry it out.

Our military has positioned assets in the region. The Chairman of the Joint Chiefs has informed me that we are prepared to strike whenever we choose. Moreover, the Chairman has indicated to me that our capacity to execute this mission is not time-sensitive; it will be effective tomorrow, or next week, or one month from now. And I'm prepared to give that order.

But having made my decision as Commander-in-Chief based on what I am convinced is our national security interests, I'm also mindful that I'm the President of the world's oldest constitutional democracy. I've long believed that our power is rooted not just in our military might, but in our example as a government of the people, by the people, and for the people. And that's why I've made a second decision: I will seek authorization for the use of force from the American people's representatives in Congress.

Watch his remarks, AFTER THE JUMP…