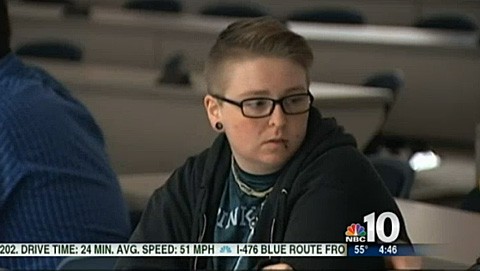 Casey Karon, a transgender Pennsylvania teen, has been told by his school district that he can't run for Homecoming King, NBC Philadelphia reports:

Caron, a senior at Richland High School in Johnstown, Pa., was told he could not be put on the ballot for homecoming king because his gender was listed as female on his driver's license. The 17-year-old identifies as male and plans to undergo gender reassignment surgery in the future.

When the high school administration denied Caron's request, he appealed to the school board. Caron argued that his driver's license had since been changed to reflect his identifying gender.

During a meeting Monday evening, the Richland School Board decided not to take up the appeal and deferred to the earlier decision by school administration.

Karon added that there are other decisions ahead as well:

He's asked to be sat on the male side of the stage during graduation in the spring and be allowed to wear blue graduation garb, which is provided to male graduates.

Caron is also seeking the creation of a Gay-Straight Alliance at the high school and has asked that gender identity be added to the school's anti-discrimination policy.