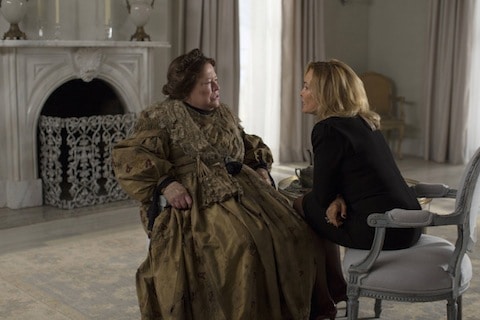 One of the most exciting elements of American Horror Story: Coven is the incredible cast. More specifically, it's the opportunity for the heavy-hitting lead females to clash in spectacularly fabulous fashion. The second episode, titled "Boy Parts," definitely delivered on that promise.

See how it all went down, AFTER THE JUMP …

It's morning meeting time at Miss Robichaux's Academy For Exceptional Young Ladies, but new student Zoe (Taissa Farmiga) isn't exactly feeling very focused. She's troubled over all the mass murdering she and actress-turned-witch Madison (Emma Roberts) did in last week's episode. (If you missed it, catch up with our recap!) Madison tries to convince her that their victims had it coming; even Kyle (Evan Peters), who's guilty by association with his fraternity brothers.

Unfortunately, that kind of thinking is going to be a tough sell for local law enforcement who are having a hard time accepting that not only did a bus seemingly take a random tumble down the street, but then one of the survivors coincidentally died under the very same mysterious circumstances as another boy with connections to the new girl in town.

So, in walks the fuzz, and it doesn't take much for Zoe to fold faster than a greased accordion. She starts shrieking about the witches and the rape and all of the murder. But before the police can round up the lousy lot of them, Fiona Goode (Lange) appears.

"Are you in charge here?" one of the officers asks. "I'm in charge everywhere," Fiona replies, as I snap wildly on my couch because Jessica Lange is the very best.

She uses some witch trick to make the cops forget about Zoe and Madison and swiftly admonishes the girls (and she does that fun trick where she throws them into the walls, which seems like her go-to classroom management technique). Zoe tries to defend herself, claiming that the cops knew too much, but Fiona is not having it. "I couldn't toast a piece of a bread with the heat they were putting on you!" Fiona retorts.

After that lashing, Madison arranges a relaxing get away to the local morgue. You know, just a fun girls day to get some air, have some laughs, raise the dead. The usual. To thank Zoe for killing her rapist, Madison is going to bring the boy Zoe liked back to life. The only problem is that Zoe's crush, Kyle, is not exactly in one piece.

So the girls embark on the grossest Etsy project of all time and begin sewing together the best frat boy parts. Once they've completed their "perfect boyfriend," they attempt a resurrection spell. Despite all the whizbang their magic kicks up, Kyle's still a corpse. Madison heads out, and, once another car pulls up, abandons Zoe inside. Once the man from the car finds Zoe and all her magical accoutrements lying about, it appears the jig is up. Until suddenly Kyle sits up and begins beating on the man.

Apparently, he finished him off, because the next thing we see of them is Kyle stumbling all Frankenstein-y out in the man's clothes while Zoe drives them off in his car. It's not until they're well on their way home that presumed-murdered witch Misty Day (Lily Rabe) sits up from the backseat and directs them back to her home. Turns out, she's not dead. Well, at least not anymore. As predicted, Misty's ability to bring the dead back to life came in awfully handy when she was killed. Since then she's been chilling out by the bayou, reanimating crocodiles so they can eat their hunters and rocking out to some Stevie Nicks. She felt Zoe summon her, and is willing to help heal up Kyle (and share in some weird sexual tension with Zoe as Rhiannon plays). He'll be good as new the next time Zoe comes to visit.

Zoe's not the only one with relationship issues, it would seem. Headmistress Cordelia (Sarah Paulson) is having fertility problems. Her husband suggests that she just wriggle her nose or whatever to use her magic hoodoo powers and conjure up a baby. Cordelia initially protests, but it's not long before their having ritualistic relations replete with spooky blackout eyes, circles of fire and writhing snakes.

When she's not busy obstructing justice, Fiona has got Madame LaLaurie (Bates) all tied up in her room. She's grilling her about how she's stayed so alive despite being very much buried in an unmarked grave for some 180 odd years. "The black devil," LaLaurie replies. You see, that mysterious vial LaLaurie so eagerly accepted from Marie Laveau (Bassett) when she showed up unannounced at her door did not poison her. Instead, it just knocked her out. When she awoke, Laveau called her outside to find her husband and daughters hanged. Then, Laveau informed her that she's been cursed with eternal life, which she will now spend in a box underground all alone.

Armed with the knowledge that it was Laveau who gave LaLaurie her everlasting life, Fiona deduces Laveau may still be around as well. Turns out she's running a small salon in the Ninth Ward. They exchange a tense tête-à-tête about the roots of the Salem witches being traced back to Tituba. However, when Fiona makes her request, Laveau laughs off the possibility of ever helping her. With that, Fiona sets a few human hair wigs ("more precious than gold") on fire and leaves with one last bon mot: "It's nice to see you're doing so well after all these years. Maybe in another century you could have two shithole salons."

While Fiona is away roasting wigs and trading barbs with Laveau, clairvoyant student Nan (Jamie Brewer) has had enough of LaLaurie's loud thoughts. She finds and frees LaLaurie, who quickly makes her escape after knocking out Queenie (Gabourey Sidibe).

Of course, missing out on the last hundred or so years has left LaLaurie ill-equipped to deal with modern society, so she doesn't get far. Fiona finds her on a bench outside her old mansion, now a museum of horrors. "I was a woman of my time," LaLaurie reasons. "That is a crock of shit," Fiona retorts. "You've got a mean streak wider than your backside, or a sickness of your mind. Either way, if ten of the hundreds of things I have read about you are true, then you deserved every minute down there under all that dirt."

The dirt might have been a better option, considering what Laveau has planned. As Fiona and LaLaurie make their way back home, Laveau unshackles her minotaur and tells him he wouldn't believe who's back.

I'm not entirely clear how LaLaurie turned a slave prisoner into a minotaur just by putting a hollowed-out bull's skull on his head without any magical powers (or, alternatively, why Laveau would use her powers to transform her lover into a minotaur). This may be revealed later, or it could be another instance of Ryan Murphy's storytelling getting a little sloppy. Also, Fiona never told Laveau that she dug up LaLaurie, so I'm not sure how Laveau knows who's back herself. I'm willing to suspend my disbelief and assume Laveau "sensed" it or used her magic to figure it out.

Next week: Patti LuPone gets in the mix!

What did you think of the second episode of American Horror Story: Coven?