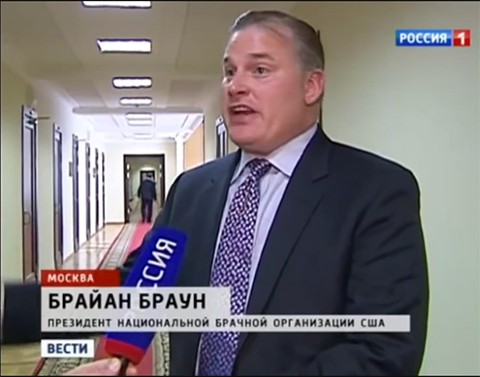 As previously reported, National Organization for Marriage President Brian Brown made a secret trip to Russia in June to meet with members of the Russian Duma. Joined by five French-Catholic anti-gay activists, Brown advocated for legislation that would ban gay foreigners, including gay Americans, from adopting Russian children. However, doing so may have been a violation of U.S. law.

Fred Karger, President of Rights Equal Rights, has written to Secretary of State John Kerry and Attorney General Eric Holder asking them to investigate whether Brown's trip violated the Logan Act. Passed in 1799 and amended as recently as 1994, the Logan Act is a "federal statute making it a crime for a citizen to confer with foreign governments against the interests of the United States":

Brown even spoke to Russia 1’s Vesti news program while in Moscow. According to Right Wing Watch, Brown told reporters:

"Right now you’re having the fight about adoption, but the adoption issue is indivisible from the marriage issue. If you don’t defend your values now, I’m afraid we’re going to see very negative developments all over the world."

Five days after Brown gave a "remarkable speech" in the Russian Duma, that same body passed a bill that banned gay couples and single parents in countries that allow gay marriage from adopting Russian children.

It is unclear at this time whether Secretary Kerry or Attorney General Holder will investigate Brown's trip and if so whether they will level charges against him.