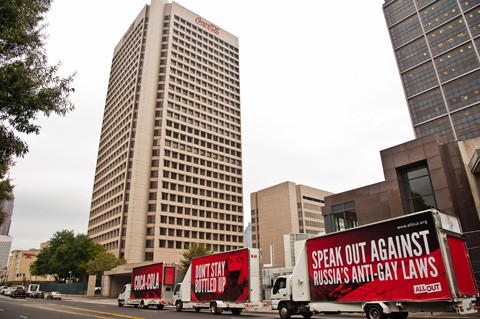 Yesterday, the activist group All Out hired three trucks to circle Coca-Cola’s global headquarters in Atlanta starting at 8 am ET and throughout the entire day, with billboards urging the company to call for a repeal of Russia’s anti-gay laws before the 2014 Winter Olympics in Sochi, Russia. 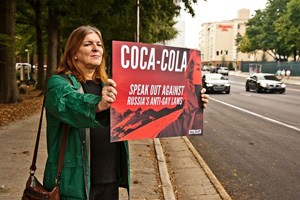 According to the group, more than 140,000 All Out members sent messages to the company’s CEO urging Coca-Cola to take the following steps:

– Speak out against the Russian anti-gay "propaganda" law and call for its repeal before the Olympics.

– Ask the Olympic Committee to change the rules so future Olympics can only happen in countries that fully respect equality.

Said Andre Banks Executive Director and Co-Founder of All Out:

“Coke is an incredibly important position of power and has the ability to influence the International Olympic Committee, other sponsors, and Russian leaders. The safety and dignity of Russians, athletes, and fans is in doubt as long as Russia’s anti-gay laws are intact. Olympic sponsors have a moral obligation to speak out now. As one of the largest Olympic sponsors Coca-Cola should take a strong stand against Russia’s anti-gay laws ahead of the 2014 Winter Games in Sochi. We urge them to speak out against the anti-gay propaganda law and call for a repeal before the Olympics, donate funds to Russian human rights defenders, and ask the Olympic committee to change the rule so future Olympics can only happen in countries that fully respect equality."

Coca-Cola is expected to make an announcement about its response to these laws, Russian journalist Masha Gessen tells Richard Socarides in The New Yorker what her suggestion might be:

First, she wants the Olympic sponsors to use their marketing clout to demonstrate support for gay equity. “It will be a lot more effective to put a rainbow on every Olympic Coke can than for an American athlete to say something that won’t get broadcast or translated on Russian TV,” she said. Gessen wants all the sponsors to use L.G.B.T. symbols in their advertising connected to the Olympics.

Russian gays are concerned not only about the propaganda law, but also about the newly proposed legislation that would strip gay parents of their parental rights, removing their children from their homes. Even though that measure seems to have been temporarilyshelved, Gessen told me that gays are now more scared than ever and are looking for ways to leave the country. Along with embedding gay-friendly messages in their ads, Gessen also wants the Olympic sponsors to provide financial support to gay-rights groups in Russia who aid refugee-resettlement efforts.