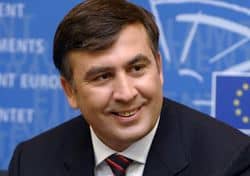 Saakashvili says the Kremlin's embrace of anti-gay policies is Putin's last despereate attempt to rein in his old empire. "He had nothing to offer to his former zone of influence. He has no soft power. He has no economic benefits to offer them," Saakashvili says. "So what he's telling them: 'OK, Europe is promising you much more, it's a better market, they might give you subsidies, they might give you lots of new opportunities and openings. But what you should know is Europe is all about gay rights. If you go to Europe, your family values will be undermined, your traditions will be destroyed. So we as Ortodox unity, we should stick together.'"

The larger issue of Russia's using its anti-gay regime as a rallying point is vital to understanding Putin's underlying motivations and goals. Indeed, many ex-Soviet States such as Ukraine and Armenia have already followed in Russia's footsteps in considering "gay propaganda" bans of their own. Saakashvili's concern is that this wave of anti-gay pressure inspired by Russia's law may eventually spread to Georgia and lead to even greater hostility towards the country's LGBT community. Back in May, we reported on the horrific footage of thousands of people – led by Orthodox priests -attacking Gay Pride marchers in Tblisi, Georgia.

Saakashvili, to his credit, acknowledged that Georgia still has a long ways to go before attitudes towards homosexuality line up with Westernized attitudes. But he doesn't see it as much more than growing pains.

"It's all about way of life, it's not about gay pride or whether your son will become gay because you are in Europe or Russia," he said. "This is all about whether political opponents are held in prison, whether there is freedom of speech, free elections, meritocracy or nepotism, criminal authorities directing everything. It's really fundamental issues that are at stake."

Previous Post: « Towleroad Guide to the Tube #1441
Next Post: Why is a Giant Grindr App Wandering Provincetown? — VIDEO »