Almost six months after Jason Collins' historic coming out, the player has yet to sign with a team in the NBA.

The New York Times has published an interview with Collins and poses the question everyone wants answered: Is he still a free agent because he is openly gay? 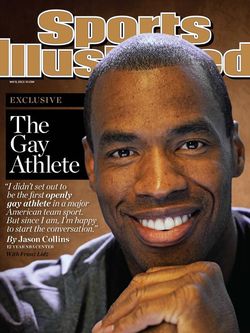 “You don’t want to speculate — I don’t go there,” (Collins) said while picking at a bowl of greens in a cafe in the Brentwood section of Los Angeles, near where he lives. But while conceding he would be at the lower end of a team’s depth chart at this stage of his career, he admitted being perplexed because, he said, “I feel there are players in the league right now that, quite frankly, I’m better than.”

As teams firmed up their rosters in late summer, Collins’s agent, Arn Tellem, received inquiries from at least three teams in the market for a reserve big man who understood positional defense. One of them, the Detroit Pistons, settled on Josh Harrellson, a third-year player who cost the Pistons more than $500,000 less than the nearly $1.4 million Collins would have earned — the minimum salary for a player with his experience.

Several league executives said the number of teams interested in Collins had shrunk because of new penalties for teams exceeding the luxury tax threshold.

Brooklyn was thought to be a potential landing site because Collins spent roughly half his career with the Nets when they played in New Jersey, where he was a trusted teammate of Jason Kidd, now the team’s coach. But with the Nets’ soaring payroll, Collins would have cost the team almost four times his salary in taxes.

Collins acknowledged that signing younger players would be more prudent financially, but he asked how experience could be discounted in such a competitive sport.

In an article titled "What we're learning from Jason Collins" published this past National Coming Out Day, ESPN NBA writer Kevin Arnovitz is a bit more blunt in his assessment:

League trends aside, nearly a dozen execs say privately that the media glare that would come with a Collins signing just isn’t worth the distraction to most teams. Locker rooms are fragile places already and not always receptive to change, and though NBA players as a whole are extremely professional with the media, it’s not their favorite half hour of the day. The easier it is, the better. If he were a rotation player or better, the thinking goes, the cost/benefit analysis might produce a different outcome.

In other words, the market for Collins would be bigger if he weren’t openly gay.

Why do you think Collins remains an unsigned player?