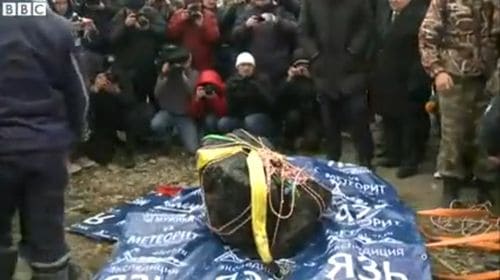 A large "meteorite" was pulled out of Russia's Lake Chebarkul on Wednesday. It is thought to be a chunk from the meteor shower in February which injured hundreds after windows were broken from the shockwaves produced. The rock, which has yet to be confirmed as a true meteorite, was five feet long and weighed in at 1,255 pounds. It broke the scale on which it was being weighed and split into three pieces.

Most fragments of the meteor — know as meteorites once they hit the ground — were believed to have sunk to the bottom of Lake Chebarkul, a frozen lake in the Chelyabinsky region. Recovery workers initially turned up empty-handed.

Scientists still need to verify that the hunk of rock came from space and was actually part of the Chelyabinsky meteor, although many features — like fractures and a crust that indicates it survived the heat of passing through Earth's atmosphere — suggest that it is a true meteorite. A small sample will be X-rayed to determine its mineral composition,according to RT.

Over 12 pieces of rock have been pulled from Lake Chebarkul since the meteor explosion, but only one-third of those turned out to be real meteorites, according to the AFP.

Check out video of the massive rock being pulled from its watery home, AFTER THE JUMP…

Previous Post: « The OXD Mirror: New Music for 10.17.13
Next Post: Rachel Maddow Explains How the GOP Got Nothing Out of Their Shutdown: VIDEO »