Pennsylvania Governor Tom Corbett, who recently compared gay marriage to incest on a radio show, may find himself rescued from a lawsuit filed against him and the state's health secretary. A lawyer representing Corbett has claimed that a suit against the governor in federal court will not hold up against constitutional law. 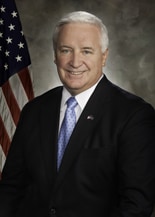 In a brief filed Monday in U.S. District Court in Harrisburg, William Lamb urged that the claims against Corbett in a pending lawsuit be dismissed. He says the U.S. Constitution prohibits lawsuits against state officials from being filed in federal court without their consent.

Lamb also says claims against Corbett and Health Secretary Michael Wolf should be dismissed because case law holds that federal courts have no jurisdiction over cases like this.

The lawsuit, which was filed this summer by 23 individual women, men, and children, is one more case in the increasingly vocal denouncement of PA's same-sex marriage ban. With a recently announced house marriage equality bill in the state, and the on-going scuffle surrounding Montgomery County's granting of marriage licenses, it seems like only a matter of time until we see some major shifts in policy.