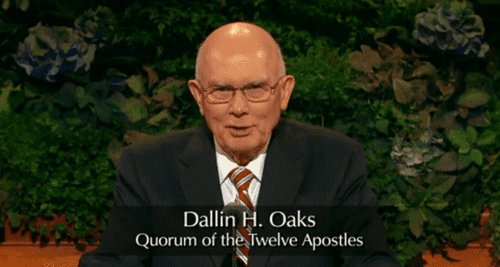 At the 83rd LDS General Conference yesterday, Mormon leaders doubled down on the Church's opposition to same-sex marriage and pushed against the "political and social pressures" that would seek to change official doctrines on sexual morality. The Salt Lake Tribune reports:

These pressures "have already permitted same-gender marriages in various states and nations," [apostle Dallin H.] Oaks told 20,000 Mormons gathered in the Conference Center in downtown Salt Lake City and millions more watching worldwide via telecast and the Internet. "Other pressures would confuse gender or homogenize those differences between men and women that are essential to accomplish God's great plan of happiness."

An LDS eternal perspective does not allow Mormons "to condone such behaviors or to find justification in the laws that permit them," said the apostle, a former Utah Supreme Court Justice. "And, unlike other organizations that can change their policies and even their doctrines, our policies are determined by the truths God has declared to be unchangeable."

The LDS stance against same-sex marriage might be misunderstood, elicit "accusations of bigotry" or trigger "invasions of our free exercise of religion," he said. But "we should remember our first priority – to serve God – and, like our pioneer predecessors, push our personal handcarts forward with the same fortitude they exhibited."

Leaders at the conference also weighed in on the issue of women and the all-male LDS priesthood. Spoiler alert: they rejected the push to ordain women. Next year perhaps?