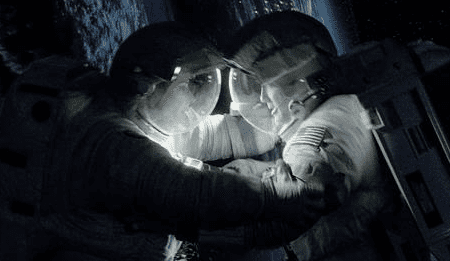 There's a brief scene in Nicole Holofcener's engaging indie hit ENOUGH SAID that repeats enough times that it could be the chorus if the movie were a song. A massage therapist (Julia Louis-Dreyfus) arrives at the home of a fit male client who lives on the top floor of his building. Every time she arrives he pops out with a killer smile looking down to greet her. He never thinks to help her as she arduously lugs her massage table up the entire steep flight of stairs.

Excuse the stretch but this is sometimes how it feels to write about movies. Especially the ones that are true lookers that you're still just not that into.

By any definition GRAVITY is the movie of the moment and by some measures it will come to be regarded as The Movie of the Year. (You can lock it up for a Best Picture nomination).  If you've ever wondered "What's all the fuss?" about something that everyone else loved I hope you'll choose empathy when you learn that I did not love it. In the binary-thinking of the 21st century the internet this makes me a hater but this is not the case.  At every zero gravity step of its way I was trying to love it.  And I did mostly like it… at least through its astounding 20 minute (?) opening act, which appears to have been miraculously filmed in one continuous shot. 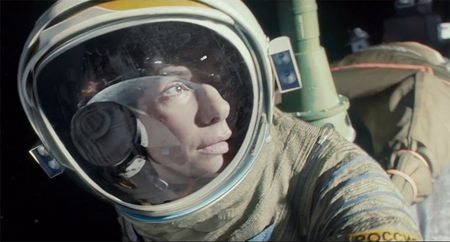 In the beginning we literally circle three astronauts at work on repairs on a satellite. Two of the Astronauts are played by massive A listers George Clooney and Sandra Bullock so you know that the third (who never gets a closeup) is your "red shirt", poor thing. As the camera circles the repairs, Astronaut Clooney, supervising, also circles the satellite in a jetpack like he's kicking back in a movie theater seat himself. So we've got helixes within helixes visually. Predictably things go horribly awry and then Sandy is spinning in circles while the camera continues to whiz around everything and everyone in the vast emptiness of space. It's absolutely dizzying and I forgot to breathe. And visually … wow wow wow.

Ambition is, unfortunately, a spiritual cousin of self sabotage and though the film is unfailingly ambitious in scope and technique (the effects are mindblowing) there isn't much else to grab on. Which is strange for an Alfonso Cuarón film. The talented writer/director has never made a bad film and his best, Y Tu Mama Tambien, proves his skill at multi-tasking. That movie managed to juggle a sophisticated and frank sexual coming of age story with a great road trip comedy and while it was doing both thing, it casually slipped in a socioeconomic travelogue portrait of an entire country. But Gravity skimps on everything that isn't visual effects based so we proceed from one scene to the next, each following the same pattern: Momentary Serenity, Something Goes Wrong. Astronaut Fights To Survive; and that scene repeats for literally the rest of the film. 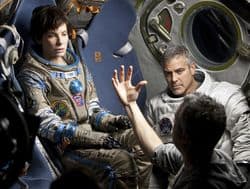 Elsewhere you can sense the compromises made to justify its behemoth budget.  Gravity makes a repeated point of telling you that there is no sound in space. So what's with that full loud orchestra guiding your emotions at every point? The casting, too, feels like production insurance.

Clooney, as an actor, rarely lets you see him sweat which works wonders for his charm-based star turns like Oceans 11 or for roles wherein he lets tiny cracks show, exposing a less self-possessed interior. Think of his increasingly unmoored corporate sharks in Up in the Air or Michael Clayton. Here that effortless megacharm proves an incongruous match for the material wherein everyone's lives are at immediate and obvious risk including his. He never once seems afraid which I'll admit took me out of the movie. Christ, he seemed more disarmed by having to run in flipflops in The Descendants than by possible loss of oxygen in outer space.

Bullocks fares much better as the focal star of the movie, gamely meeting the physical demands of her role — including her very own Barbarella striptease (if Barbarella was a sexless family-friendly epic that is). Unfortunately the screenplay hands her only the most basic stock character to play (Grieving Woman). Gravity only asks Sandra for three things: fear, sadness, and survival adrenaline. She's a dependable star so she delivers.

Still, at the very least, Gravity is a directorial feat, eye-popping from frame one to end credits. It's the best visual effects reel Hollywood has produced since Avatar, and could well become the rare gold standard that holds up a even two decades later like those once-breakthroughs Terminator 2 or Jurassic Park which still look awesome despite being ripped off hundreds of times since. 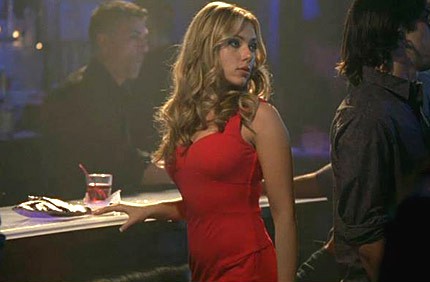 In Joseph Gordon-Levitt's DON JON, Scarlett Johansson is introduced visually in a tight red dress as her male admirers, led by the title characters (newly muscled JGL…speaking of eye candy) describe her as a "dime". In that comedy's strongest move in its final act, it suddenly asks you to look at her more deeply. Gravity is that kind of a dime. The exterior is so intoxicating that it's easy to forget to even consider anything else beneath the glossy perfect 10 surface. And what's inside counts a lot in the long run. Gravity is being compared to the Stanley Kubrick classic 2001: A Space Odyssey in several reviews which, and I'm not the first to note this, is a strange comparison. 2001 is notoriously enigmatic and even if you've seen it many times its mysteries remain intact. The awe has long outlasted its now dated visual effects. With Gravity the only question that haunts afterwards is "How did they film that?"

My point though I fear I've lost it is that Gravity is a dime and I'm sure I'll give it a second chance but loving it is a steep climb from where I'm standing, looking up at it.

Whether or not you love Gravity, and my guess is you will (I'm jealous that I'm missing the love-in), it's a good time to be hitting the theaters. Enough Said and Don Jon, also in release, are far from perfect movies and nowhere near as ambitious as Gravity, but as star vehicles they're exceptional. The late James Gandolfini and Julia Louis-Dreyfus make a totally believable tentative couple in the former, and Scarlett Johansson has NEVER been sexier (which is saying a lot) or funnier than she is in the latter. People like to claim that the Romantic Comedy genre is a landfill but this is merely a byproduct of the strange resistance to labelling good comedies that are about Romance as RomComs. It seems that that label only successfully attaches itself to bad "chick-flicks". The good ones get dragged and dropped into the more desirable Dramedy or Comedy folders. October gets even better in the next two weeks when CAPTAIN PHILLIPS and 12 YEARS A SLAVE hit. Expect those two to battle it out with Gravity for 'Best of the Year' honors in the oncoming awards season and all over top ten lists.