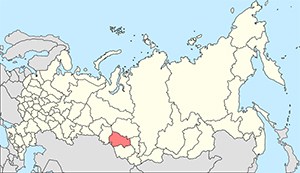 Russia just cannot catch a break. As if the anti-gay laws and Olympics controversies weren't enough, now a new strain of HIV, dubbed 02_AG/A, is spreading like wildfire in that country. First discovered in the Siberian city of Novosibirsk (located in the Novosibirsk Oblast highlighted at right) in 2006, 02_AG/A now accounts for over 50% of new HIV infections in the region, and since its discovery the number of infections jumped a jaw-dropping 750% from 2,000 cases in 2007 to 15,000 cases in 2012.

The virus simply seems to be more virulent, not more deadly or resistant to treatment, but Russia's current social climate could make such a rapidly transmissible virus even worse. HIV research is underfunded as are treatment and testing options, and the political posturing around homophobia is making things worse. Additionally, sex education in the country is abysmal on the level of the most conservative of red states. The Moscow Times quoted Pavel Astakhov, Russia's children's rights advocate, as saying in September that he opposed teaching teenagers about sexual health in school, adding that Russian literature is "the best sex education there is."