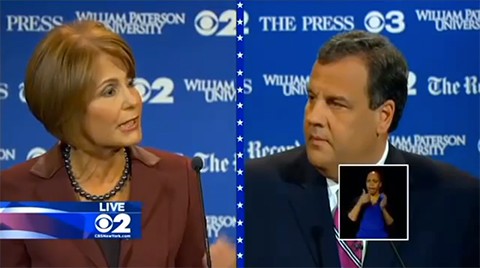 As previously reported, New Jersey Governor Chris Christie was confronted at a campaign stop at a diner by a local patron over his position on gay marriage. Asked why he opposed marriage equality, he could provide no more in-depth an answer than, "I think marriage should be between a man and a woman." When prodded further by the patron who referred to gay marriage as "a human rights issue," Christie responded: "Says you…This is an issue where we have an honest difference of opinion. Okay, so you put it on the ballot — you vote your way, I vote my way. And whoever gets the most votes wins." As Think Progress reports, Christie's Democratic challenger, state Senator Barbara Buono was not content with his answer and took him to task on the subject at the state's gubernatorial debate later that same day:

BUONO: Governor, show a profile in courage and do the right thing for our sons and our daughters, our brothers and our sisters. This is a human right and it really should not be on the ballot. We should not have the majority of the people decide the minority’s rights. It’s just wrong.

CHRISTIE: Thirty-five other states — 35 of the 50 — have put this question on the ballot, and so the idea that this should never be on the ballot is something that is against what 35 other states have done. I trust the people of New Jersey to make this judgment. I don’t trust 121 politicians with political agendas. […]

BUONO: My daughter, who is openly gay, is not a political agenda.

You can watch a full video of the debate (with the focus shifting to marriage equality around the 5:09 mark) AFTER THE JUMP…