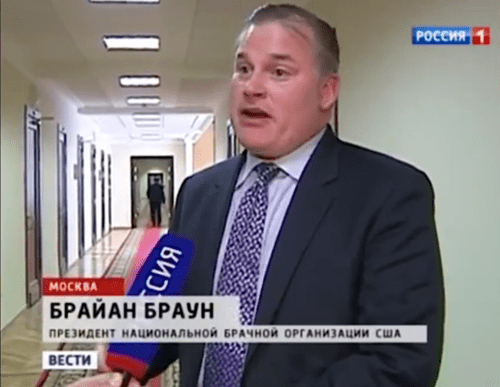 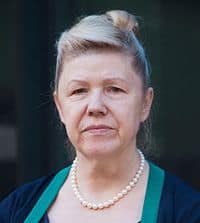 In a report released yesterday, Right Wing Watch revealed that National Organization for Marriage president Brian Brown participated in a joint meeting with Russian legislators back in June to discuss changing the country's international adoption laws to exclude same-sex couples. Brown's trip to Russia, which was not publicly announced by NOM, culminated in a rousing speech given to the Duma's committee on foreign affairs and its committee on family, women and children – whose chair, Yelena Mizulina (right), authored the ban on gay "propaganda" and the anti-gay adoption bill that was signed into law in July.

"We are talking about violations of rights, we are talking about the rights and problems of children in their education. We should not shy away from this and should not forget about it and create an illusion for ourselves. A reconsideration of the definition and understanding of marriage is in fact a real threat to rights. Very soon after a law was passed that legalized same-sex marriage in the state of Massachusetts, we saw that religious organizations were closing down, religious organizations that dealt with adoptions and that did not support adoption by same-sex families. They were closing one after another.

We have actually seen that in some schools, they are talking to children about homosexuality, but in fact they don't have the right to learn about a lot of things until a certain age. […]

I think that this visit, the invitation to visit Russia, will enable the development of this movement around the world. We will band together, we will defend our children and their normal civil rights. Every child should have the right to have normal parents: a father and a mother.

You can watch a Russian dubbed interview of Brown at the meeting, AFTER THE JUMP…

"This goes well beyond marriage," said Griffin. "Apparently NOM is expanding its portfolio to include the international persecution of LGBT people. We knew that Brian Brown had it out for gay people in America, but it's now become clear that he's hell-bent on ruining the lives of gays and lesbians worldwide."