In a Facebook post this afternoon, Pennsylvania's gay Rep. Brian Sims reacted to Governor Tom Corbett's remarks on a radio show this morning in which he compared gay marriage to incest. 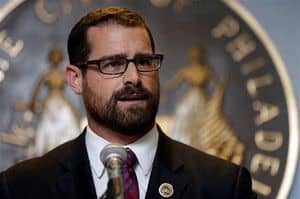 All day long I've been hearing about the Governor's comments earlier this morning comparing marriage equality to incest. In truth, I'm not giving him or his comments all that much thought and I encourage you to do the same.

No one, not even his own party, would argue that he’s an intellectual heavyweight or even a particularly thoughtful person. The larger issue is that despite the fact that the majority of Pennsylvanians disagree with him, he continues to be the heaviest hitter in Pennsylvania’s anti-equality crusade.

Our job isn’t just to be frustrated with the homophobia coming from the Governor’s Mansion, it’s to do everything we can to ensure that his chapter in Pennsylvania’s political history is as sad and short as his record on schools, economic development and civil rights.

Tom Corbett has been a disaster for Pennsylvania for so many reasons and I hope this fuels your resolve to vote him out of office.