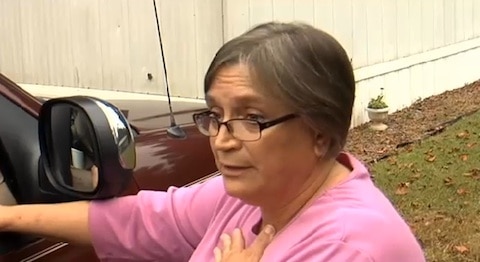 Linda Oliver, the mayor of West Union, South Carolina, is under fire for comments she made on Facebook using the “Q-word” with regard to same-sex marriage, and tells WHNS how she really feels about it:

“I don’t want it rammed down my throat.”

Oliver’s online comments were in regard to the recent actions by Buncombe County Register of Wills Drew Reisinger in neighboring North Carolina, who began accepting marriage license applications for gay couples this week.

“What’s it gonna take to get these queers to realize they don’t need a piece of paper. God will not bless their union because he plainly speaks against queers in the Bible. Want to cover your queer with insurance? Buy a policy. Want your queer to get your stuff when you die? Make a will.”

Now there is reportedly a Facebook petition calling for Oliver to be removed from office.

“All I can say is if people want to crucify me that’s fine. I know that following Jesus, I’m going to be crucified…And I got lambasted because I quoted the bible and stuff like that on Facebook and that’s the way I feel…I have apologized, it’s on there if people would just read the feed. They’re focusing on the word and I apologized for that. If people would read the whole thing they’ll see that I plainly said I will not say that anymore, I’ll say homosexual…What I’m emotional about is because my feelings- the way I feel toward homosexuals is how I’ve been brought up.”

Watch, AFTER THE JUMP… FOX Carolina 21