Noting that "the community’s activism, outside mobilization, and just family awareness and respect for people to end discrimination" contribute to a different public attitude than the last time ENDA was introduced, Nancy Pelosi told reporters that she envisions a path to passage of ENDA similar to that of the Violence Against Women Act: 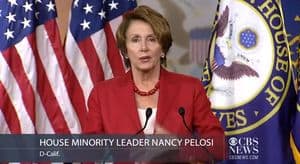 “We made it too hot to handle in the public,” Pelosi said. “It had to come to the floor. Even so, a majority of the Republicans voted against the Violence Against Women Act. But nonetheless, it came to the floor. I hope we could have a similar situation with this.”

Asked to clarify whether VAWA reauthorization could be a model for House passage of ENDA, Pelosi called for expedited movement of the legislation in her chamber.

“Well, I would think it would be “once burned, twice learned,” and that they would, shall we say, save some time by taking it right to our committee and to the floor,” Pelosi said. “It’s really important. Our country – ending discrimination is what we are all about as Americans, and we should not have discrimination in the workplace because of gender identity.”

Previous Post: « You May Be Participating in a Lot More Religiously-Oriented Practices Than You Know: VIDEO
Next Post: Neil Patrick Harris and David Burtka Post Monster Family Portrait for Halloween: PHOTO »