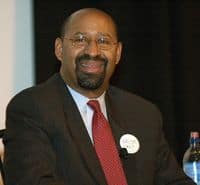 On Thursday, Philadelphia Mayor Michael Nutter (pictured right) signed into law legislation that he hopes will make The City of Brotherly Love "the most LGBT-friendly" city in the world. NBC 10 reports:

Nutter, city and state lawmakers and gay rights advocates said the legislation makes Philadelphia the first city in the U.S. to offer tax credits to companies that extend the same health care coverage to LGBT employees' domestic partners and their children as they provide to heterosexual spouses and their children.

"My goal is for Philadelphia to be one of, if not the most, LGBT-friendly cities in the world and a leader on equality issues," said Nutter, adding that the signing struck a personal note because his friend, the late City Councilman John Anderson, was a gay man and a mentor who inspired him 30 years ago to pursue a life of public service.

In addition to the business tax incentives, which were backed by the Greater Philadelphia Chamber of Commerce as well as LGBT advocacy groups, and the gender-neutral restrooms (required in all new or renovated city-owned buildings), the legislation revises Philadelphia's anti-discrimination law to include transgender people, extends decision-making rights to life partners on medical and other issues, and changes city forms and websites to offer options for same-sex couples and transgender people. 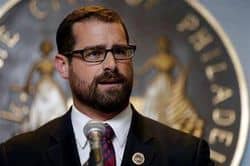 State Rep. Brian Sims (pictured right), Pennsylvania's first openly gay lawmaker, helped draft the law's language. In a statement, Sims applauded the bills passage: "This is a city that is truly respecting all its citizens…It is because of that respect that we are indeed a first-class city and we will continue to shine."