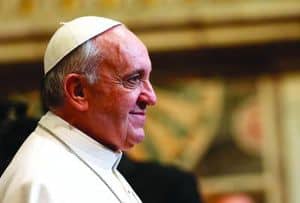 Pope Francis has earned high marks as of late for what many view to be conciliatory remarks made towards the gay community. While in Brazil earlier this year the Pontiff proclaimed, "Who am I to judge a gay person of goodwill who seeks the Lord? You can't marginalize these people." In an interview with America Magazine he also added that the Church cannot "spiritually interfere in the life of a person." Now a report has emerged that the Pope received a letter in June from a group of gay and lesbian Catholics who call themselves the Kairos of Florence, requesting a dialogue with His Holiness. According to The Huffington Post, in their letter, the Kairos "[noted] that the absence of
open lines of communication 'always feeds homophobia.'" The Pope's response proved somewhat shocking at the time to the members of the Kairos, though given the Pontiff's more recent comments, it does not seem out of character:

While in the past, the group's letters to various Catholic officials
had been received with silence, the group was shocked when Francis and
the Vatican Secretary of State responded.

Kairos member Innocenzo Pontillo told the paper Francis said “he
appreciated very much what we had written to him" and "also assured us
of his benedictory greeting.” In contrast, Pontillo said the Archbishop
of Florence, Giuseppe Betori, had responded to similar letters by
refusing to meet with the group so that he would not be seen as
legitimizing homosexuals.

It should be noted that the contents of the letters remain a secret,
and La Repubblica was quick to point out the paper was dependent on
Kairos for information about the exchange.