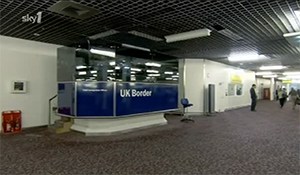 Those seeking asylum in the United Kingdom because they risk persecution elsewhere based on their sexual orientation have faced a high burden of proof, often times grappling with "extraordinary obstacles," according to the BBC: "In extreme cases claimants had handed over photographic and video
evidence of 'highly personal sexual activity' in an effort to persuade
officials."

The government's Home Affairs Committee was none too pleased about the UK Border Agency's failing to "treat asylum seekers with dignity and, simultaneously, failing to deal effectively and fairly with their claims":

"We were concerned to hear that the decision
making process for LGBTI applicants relies so heavily on anecdotal
evidence and 'proving that they are gay'."

[The Committee] added that "it is not appropriate to force people to prove
their sexuality if there is a perception that they are gay. The
assessment of credibility is an area of weakness within the British
asylum system.

"Furthermore, the fact that credibility issues
disproportionately affect the most vulnerable applicants – victims of
domestic and sexual violence, victims of torture and persecution because
of their sexuality – makes improvement all the more necessary."

Keith Vaz, the Labour MP who is the chairman of the Home Affairs
Committee, spoke out against the indignities suffered by LGBT asylum
seekers:

"It is
absurd for a judge or a caseworker to have to ask an individual to prove
that they are lesbian or gay, to ask them what kind of films they
watch, what kind of material they read.

"People should accept the statement of sexuality by those who
seek asylum. This practice is regrettable and ought to be stopped
immediately."

Previously, identifying as LGBT was not enough to even request asylum as the UK Border Agency had a policy that put faith in "'voluntary discretion' – which had meant it should be seen an option for
claimants to conceal their sexuality in order to avoid abuse." That has changed since a 2010 court ruling that invoked, "the 'underlying rationale' of the United Nations Refugee Convention…that people should be able to 'live freely and openly' in their own
country without fear of persecution" to make the case that LGBT persons from countries that have anti-gay laws on the books should be granted asylum.