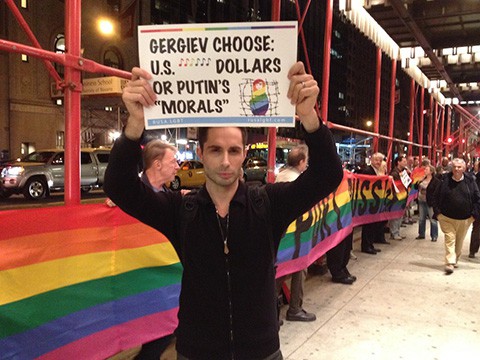 As planned, activists from Queer Nation NY protested a performance at Carnegie Hall Thursday night led by Russian conductor, Valery Gergiev, who The New York Times calls, "one of Russia’s most important cultural exports these days." The furor was over Russia's recently enacted anti-gay law that makes it a crime to disseminate propaganda promoting "non-traditional" sexual orientations. Gergiev has been a vocal supporter of President Vladimir Putin, a key proponent of the of anti-gay measures in Russia, even receiving the recently resurrected Soviet-era honor "Hero of Labor" from Putin. Last month also saw Queer Nation NY show up to protest Gergiev and Russia's anti-gay policies at the opening night of New York's Metropolitan Opera.

From Queer Nation, via press release:

"Valery Gergiev should not be able to perform without being called out for his vocal support of Russia’s anti-gay president," said John Weir, one of the protesters. “Gergiev’s silence about Putin’s anti-gay laws is killing lesbian and gay Russians. We’re here to break that silence."

On October 4, Queer Nation wrote to Clive Gillinson, Carnegie Hall’s executive and artistic director, asking that Carnegie Hall condemn the Russian government’s attacks on LGBT Russians. He declined, adding that “musical events are not the appropriate setting for political statements.”

Gergiev, your silence is killing Russian gays!” several protesters
shouted, as Mr. Gergiev, in tails, kept his back to the audience. Some
members of the audience booed the protesters; others applauded. One
woman yelled, “This is an artistic event!”

The protesters were removed from the auditorium, and the concert proceeded.

Both of the Gergiev performances delayed by protests had an added
resonance for gay rights supporters. The Met opened its season with
“Eugene Onegin” by Tchaikovsky, whom Peter Gelb, the Met’s general
manager, described as
“Russia’s great gay composer.” And the Carnegie Hall concert featured
three Stravinsky ballets — “The Firebird,” “Pétrouchka,” and “The Rite
of Spring” — that were commissioned by the great impresario Sergei
Diaghilev, who was also gay, for his storied dance troupe, the Ballets
Russes