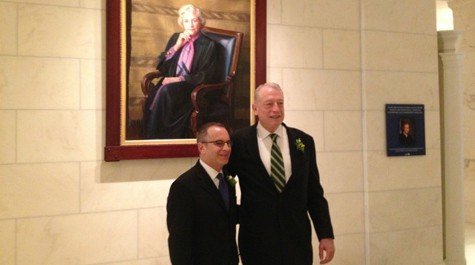 The ceremony took place in the lawyer’s lounge of the court, according to court spokeswoman Kathy Arberg.
That is just off the courtroom where the sitting justices delivered a pair of 5-4 decisions in June that stopped short of legalizing gay marriage across the country yet struck down a federal law barring benefits for spouses in same-sex marriages.

It was not the first gay wedding ceremony at the court building. Over the weekend, Justice Ruth Bader Ginsburg presided over the wedding there of New York couple Ralph Lee Pellecchio and James Carter Wernz, according to a wedding announcement in the New York Times.
In August, Ginsburg became the first justice to officiate at the wedding of a gay couple.

“For the last two years, I have been rector of William and Mary, which is my alma mater, and that’s chair of the board. And she was chancellor, which is a 320-year-old position that George Washington once held, and a lot of people like that. So, I worked closely with her. I knew her well,” he said. “And so it was logical, when we decided to get married, that I would ask her to do it. And she was most gracious, really just a remarkable individual.”

Asked why he sought to hold the ceremony at the court, Trammell laughed, “That’s where she was.”

Previous Post: « Senator Rob Portman: ‘I am Inclined to Support’ ENDA
Next Post: AIDS Charity Housing Works to Get at Least $211,000 for Banksy Nazi Painting »