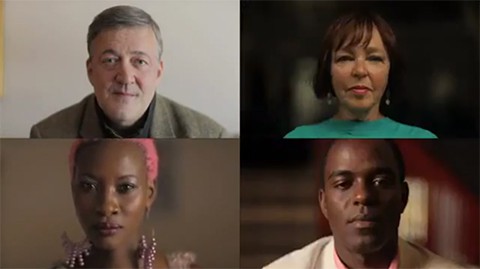 Stephen Fry, the British actor, writer, director and activist, has released a new two part documentary entitled, Stephen Fry: Out There, "a series about gay people and the trouble people have accepting them." The first episode sees Fry, a long-time foe of anti-gay bias, interviewing Elton John and David Furnish, discussing how John's coming out was a "game-changer," and later psychologist Joseph Nicolosi, a major proponent behind the "reparative therapy" movement. The second episode follows Fry as he travels around the world, examining a broad range of oppressive attitudes towards homosexuality, as The New Statesman points out:

in Brazil, a gay person is murdered every 36 hours; in Russia, it is illegal to “promote” homosexuality, a law that has far-reaching and monstrous consequences for the parents and children of gay people (who are “promoting” homosexuality by being alive); in India, the hijras (men who, broadly speaking, identify as women) are forced to live on the outer margins of society.

Fry's own introduction to the series sums up his point of view very succinctly:

There are people who are so rabidly homophobic and I just find that fascinating. It’s as if you met someone who absolutely spent all their life trying to get rid of red telephones. You’d go, what? You just would not understand it. Why would someone bother to attack a group of people who mean to do them no harm?

You can watch both episodes AFTER THE JUMP…