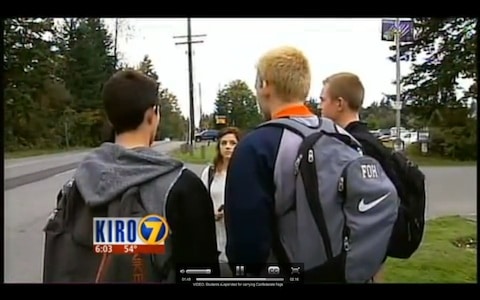 Two juniors at Tahoma High School in Washington were suspended last week after they wore Confederate flags to school to make an anti-gay statement, KIRO-TV reports:

They said two 11th-grade boys wore the flags in a common area of Tahoma High School around about 50 kids and some of them started getting upset. Tiki Scroggins, who was picking up her nephew, pointed out the flag is often seen as a symbol of slavery and racism. "I can see where we wouldn't OK that — there's too many ethnic backgrounds that that could offend," Scroggins said.

The school district didn't want to comment on camera. But a spokesperson told KIRO 7 by phone that a 10th-grade student had been displaying a gay-pride flag for the past two weeks. He said the Confederate flags were the two boys' answer.

Watch KIRO-TV's report, AFTER THE JUMP…

Previous Post: « Daniel Radcliffe on the Physical Pain of Gay Sex and the Heartbreaking Task of Finding Yourself: VIDEO
Next Post: Gay Relationship Advice: VIDEO »