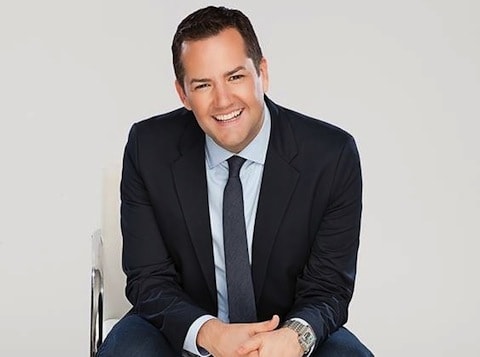 This is the first installment in a two-part interview with TV personality Ross Mathews. Come back tomorrow to hear what Ross has to say about his life in Hollywood.

Ross Mathews is a man who wears many hats — host of Hello Ross on E!, red carpet reporter, best-selling author, just to name a few. He's interviewed the First Lady, made besties with Gwyneth Paltrow and famously interned for Jay Leno. Since making his mark as the nicest guy in Hollywood, Mathews told Towleroad last Friday that he's setting his sights on something bigger.

"I'm so lucky to have a platform where I literally talk to millions of people a week, and I take it very seriously," he said. "I also have a direct line to the LGBT community because, of course, I have a large base of LGBT fans, but also I travel the country, I visit colleges, I am grand marshal at prides across the country … With that sort of platform I feel a responsibility to talk about the issues facing that community."

On the top of his list is spreading the message about the importance of getting tested for HIV to the gay community.

Read more about what drew him to this work, AFTER THE JUMP…

"In 2013, you'd think numbers would be lower because of all the awareness we have, but, of the new cases of HIV, 63 percent of them are gay men," he said. "I really want to get the message out there about how important it is to be tested."

To help spread the word, Mathews has partnered with the makers of OraQuick, an in-home, oral HIV-testing product, to let people know that getting tested is easier than ever.

"It's not like back in the day where you would go to a clinic and have to give blood, and wait a week for results, and it was nerve-racking and scary."

Mathews isn't shy about sharing his personal history with HIV testing, either.

"In my personal life, I was never Mr. Super Sexy, so I never got the chance to be really promiscuous. I kind of wish I could have been, but I always would have been safe, because I was in sixth grade when they first started teaching HIV/AIDS awareness … they really drilled into us to only have safe sex ever." he said. "Even though I knew there was a pretty good chance that I was negative for my first time tested, I was so scared. It was a routine physical and I waited a week — a week — for the results, and it just lived in the back of my mind for that whole week."

What attracted Mathews to OraQuick was the ease with which the product delivered results, and the quick turnaround of results.

"I made a snack and turned on the TV, I didn't even get to finish the program by the time the results were ready," he said. "Just 20 minutes from now, from this moment, you could know your status, and there is such power in that."

Still, the spokesperson role is a new one for Mathews. He initially had his doubts if he could be an effective messenger for such an important topic, but realized the potential impact was worth it.

"I was a little nervous. Do people want to hear this from me? Do they just want me to shut up and giggle?" he said. "People understand why I have to be part of this: If we get one person to know their status … this could save lives."