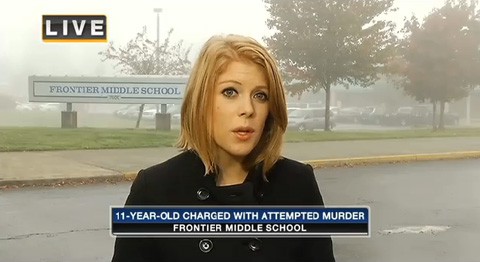 A Vancouver, Washington mother's call to school administrators may have foiled her son's plan to kill a fellow classmate, KPTV reports:

The mother of an 11-year-old boy called school administrators to report her son may have taken kitchen knives to school, and that's what led police to find 400 rounds of ammunition and a gun in his possession, according to court documents released Thursday.

Vancouver police school resource officers detained the boy at Frontier Middle School on Wednesday at 9 a.m. after the mother's phone call. They said they found a .22 caliber handgun in his front pants pocket.

Detectives interviewed school administrators, and were told the boy said a voice in his head was telling him to kill a classmate for calling his friend gay, the court documents said.

In a later interview with police, the boy told detectives he planned to shoot his classmate in the arm, and then shoot himself in the head.

Watch KPTV's report, AFTER THE JUMP…