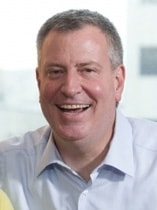 Bill De Blasio won a landslide election to become NYC's 109th mayor and its first Democratic mayor in a generation:

His overwhelming victory, stretching from the working-class precincts of central Brooklyn to the suburban streets of northwest Queens, amounted to a forceful rejection of the hard-nosed, business-minded style of governance that reigned at City Hall for the past two decades and a sharp leftward turn for the nation’s largest metropolis.

Mr. de Blasio, a Democrat who is the city’s public advocate, defeated his Republican opponent, Joseph J. Lhota, a former chairman of the Metropolitan Transportation Authority, by a wide margin.

Exit polls conducted by Edison Research suggested that the sweep of his victory cut across all of New York’s traditional divides. He won support from voters regardless of race, gender, age, education, religion or income, according to the exit poll.

In other election results:

Annise Parker has won reelection as mayor of Houston, Texas.

And here are the results for candidates endorsed by the Victory Fund.

If there are races around the country that have been called that Towleroad readers might be interested in, please feel free to chime in in the comments.