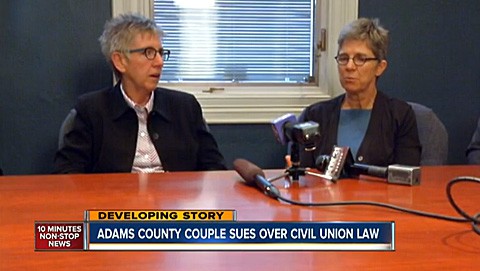 The lawsuit alleges that Article II, Section 31 of the Colorado Constitution, which states that “only a union between one man and one woman shall be valid and recognized as a marriage,” violates the equal protection and due process guarantees of the 14th Amendment to the United States Constitution.

Brinkman and Burd went to the Adams County Clerk and Recorder’s office and applied for a marriage license, Ogden said. The deputy clerk said they were not eligible to marry each other because they are both female, and instead offered them an application for a civil union.

"They rejected this offer because civil unions are more akin to a business relationship than to the expression of dignity, love, respect and commitment that married heterosexual couples enjoy because they are married," Ogden stated.

There are currently 30 same-sex marriage lawsuits in 22 states.