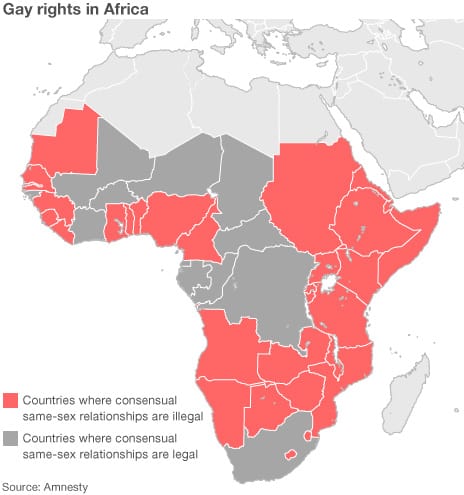 The European Court of Human Rights has ruled that persecuted gays in African have grounds for asylum, offering an opinion in a case brought by The Netherlands concerning three gay citizens from Uganda, Senegal, and Sierra Leone, the BBC reports:

The European Court of Justice (ECJ) says asylum can be granted in cases where people are actually jailed for homosexuality in their home country.
ECJ rulings apply to all EU members.

Homosexual acts are illegal in most African countries, including key Western allies such as Uganda, Nigeria, Kenya and Botswana.
In June a report by Amnesty International said homophobic attacks had reached dangerous levels in sub-Saharan Africa and must stop.

The ECJ judgment on Thursday was a response to the Dutch Council of State, a top advisory body, which had asked whether homosexuals could be considered a "particular social group" and whether criminalisation and possible imprisonment amounted to persecution.

The ECJ says laws specifically targeting homosexuals do make them a separate group.
But it is up to the national authorities – in this case the Netherlands – to determine "whether, in the applicant's country of origin, the term of imprisonment… is applied in practice".

Previous Post: « In Weather, Another Gay Front Coming Through: PHOTO
Next Post: Terry McAuliffe Says His First Executive Order as Virginia Governor Will Be to Protect LGBT Employees: VIDEO »