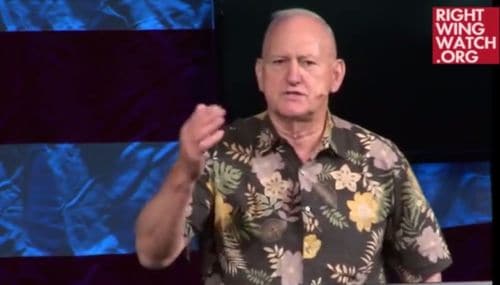 At William Jessup University's Men's Prayer Breakfast several months ago, Family Research Countil Executive Vice-President Jerry Boykin assured the audience that Jesus was not feminine, but rather a hulking guy with muscles. Boykin's talk, on the "4 P's of Biblical Manhood," took issue with the feminization of Jesus in imagery and discussions in churches around the country. "Part of the problem is that we've lost our understanding of who Jesus was," he began, asking, "Do you think he looked like this effeminate picture we always see?"

As Boykin explained, Jesus was a carpenter and stone mason for most of his life, which required him to be constantly lifting heavy pieces of wood and stone. All this lifting, in turn, meant that Jesus had calluses on his hands and "big, bulging biceps, big ole veins popping out of his arms, thin waist, [and] strong shoulders."

Previous Post: « Towleroad Guide to the Tube #1471
Next Post: Vladimir Putin Warns Against Creating ‘a Torrent of Hatred’ Towards Gays »