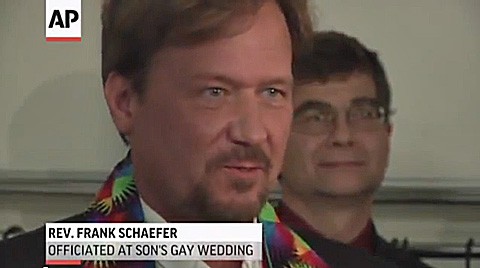 Methodist pastor Frank Schaefer was suspended for 30 days yesterday for officiating at his gay son's wedding in 2007, and given an ultimatum according to the AP: "surrender his credentials in a month if he can’t bring himself to adhere to the laws of the church’s Book of Discipline."

Schaefer has no intention of doing so, he says:

“I feel I have to be an advocate, an outspoken advocate for all lesbian, gay, transgender and bisexual people."

Rather than beg for mercy, the pastor upped the stakes.

The church “needs to stop judging people based on their sexual orientation,” he told jurors. “We have to stop the hate speech. We have to stop treating them as second-class Christians.”

After the jury pronounced its sentence, Schaefer’s supporters began overturning chairs in the courtroom — symbolizing the biblical story of Jesus overturning the tables of the money changers — and held an impromptu communion service.

Watch Schaefer speak after his sentencing, AFTER THE JUMP…