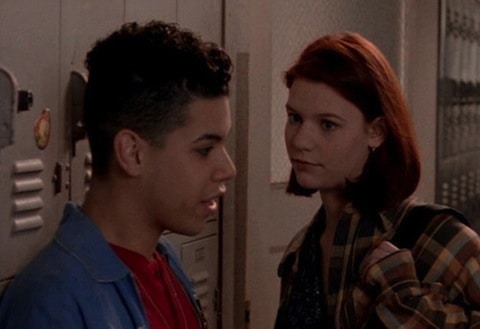 The phrase "gay icon" gets tossed around a lot, but what does that really mean? Welcome to Gay Iconography, a new feature where we present a proposed iconic figure or character and then ask you to weigh in with your thoughts. Last week, we discussed Roseanne and received lots of interesting responses about her work, her legacy and her more recent controversial comments about the trans community. If you missed it, you can join that conversation here. This week's installment shifts its focus to another '90s ABC series.

Even though it only lasted one season, My So-Called Life is one of the most beloved television shows of all time. Its realistic portrayal of the teenage experience extended beyond just the ennui, awkward first loves and Manic Panic dye jobs. It also encompassed the show's deft handling of hot-button topics that were allowed to unfold over the course of several episodes and often avoided the kind of hokey happy ending that plagued "very special episodes" on other series.

Chief among the issues tackled by MSCL was the ongoing coming out process of Rickie Vasquez. The show's commitment to authentic adolescent storytelling ensured he never became just the eyeliner-adorned B.F.F. in the girls' room, nor was he only reduced to his tragic backstory. If Rickie was a proto-Kurt Hummel, he did it with just as much style, but more heart and much less support. Not to mention the significance of Rickie being a queer person of color on primetime network TV played by an out actor (Wilson Cruz) in 1994.

Revisit some key Rickie moments from the show, and share your thoughts, AFTER THE JUMP …

Rickie's Got A Gun: Angela (Homeland's Claire Danes) confronts Rickie about a rumor that he brought a gun to school. Turns out, he's behind the rumor himself in an effort to get folks to stop harassing him at school.

The Other Person's Perfectness: One of the things that makes Rickie so lovable is that he's a hopeless romantic. While this clip contains his advice to Angela, it reveals so much about his own insecurities and relationship fears.

Touched By An Angel: When Rickie's abusive uncle kicks him out of the house, he's got nowhere to go for the holidays. Angela's parents are forced to confront their own discomfort with Rickie when her mother Patty (Bess Armstrong) says Rickie can't join them for dinner, but (straight, white) Brian Krakow (Devon Gummersall) can. Sure, it took divine intervention in the form of an angel played by Juliana Hatfield for Patty to realize what her stubbornness could cost, but even that fairly cheesy plot device doesn't make her physical embrace of Rickie any less moving.

Gimme Shelter: Still with nowhere else to go, a gay teacher tries to get Rickie set up in local shelters. When that doesn't work out, he takes him in himself. In light of the recent discussion around ENDA, the portion when Mr. Kitimski (Jeff Perry) weighs the implications of a gay teacher taking in a gay student still feels relevant nearly two decades later.

Just Dance: Ricky's dance with Delia is his opportunity to proudly put himself out there and not care if he's blending in. Once you've seen this clip, it's hard to ever hear Haddaway's "What Is Love" without imagining Rickie and Delia vogueing in a high school gymnasium.

What do you think? Did My So-Called Life's tendency toward teenage navel-gazing make Rickie feel endearingly realistic, or did you never connect with the character?  Tell us why you think Rickie Vasquez is (or isn't) an iconic gay character in the comments.

Previous Post: « Gagadoll is Coming: VIDEO
Next Post: Alec Baldwin Uses His Gay Hairdresser to Prove He’s Not a Homophobe »