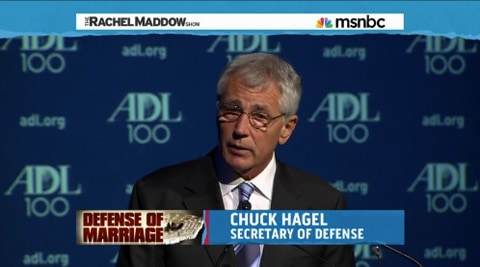 In a blistering speech delivered to the Anti-Defamation League on Thursday night, Defense Secretary Chuck Hagel blasted the rogue states which are refusing to issue spousal benefits at their National Guard facilities, saying their actions are wrong, hurt the military, and further prejudice. 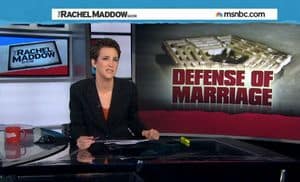 Hagel issued a stern order for those states to comply with federal law or he will take further action.

We've been covering this issue over the past couple of months. South Carolina, Texas, Indiana, Georgia, Florida, Mississippi, Louisiana, Oklahoma, and West Virginia are the states that are not in compliance with the Pentagon orders..

Here are Hagel's remarks, via the White House:

When the Supreme Court issued its decision on the Defense of Marriage Act this summer, the Department of Defense immediately began working on providing the same benefits to all eligible spouses, regardless of sexual orientation. We did it because everyone who serves our country in uniform, everyone in this country, should receive all the benefits they deserve, and they've earned, and in accordance with the law. Everyone's rights must be protected.

This means that all spouses of service members are entitled to DoD ID cards, and the benefits that come with them. But several states today are refusing to issue these IDs to same-sex spouses at National Guard facilities. Not only does this violate the states' obligations under federal law, but their actions have created hardship and inequality by forcing couples to travel long distances to federal military bases to obtain the ID cards they're entitled to.

This is wrong. It causes division among our ranks, and it furthers prejudice, which DoD has fought to extinguish, as has the ADL.

Today, I directed the Chief of the National Guard Bureau, General Frank Grass, to take immediate action to remedy this situation. At my direction, he will meet with the Adjutants General from the states where these ID cards are being declined and denied. The Adjutants General will be expected to comply with both lawful direction and DoD policy, in line with the practices of 45 other states and jurisdictions.

Whether they are responding to natural disasters here at home, in their states, or fighting in Afghanistan, our National Guardsmen all wear the uniform of the United States of America. They are serving this country. They – and their families – are entitled to all the benefits and respect accorded to all of our military men and women.