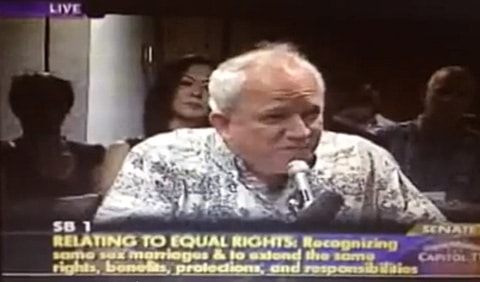 Thousands of anti-gay religious folk continue to testify before the Hawaii House of Representatives in its special legislative session to address a marriage equality bill, including NOM Chairman John Eastman (above).

AzBlueMeanie sums up where we're at as of last night:

Public testimony continued in the Hawaii House until 11:00 p.m. Saturday night. The hearing will resume on Monday, November 4, at 11:00 a.m. in the Capitol Auditorium. Monday’s hearing will continue to be broadcast live by Capitol TV and on Olelo Channel 53.

Religious groups opposed to marriage equality are attempting a "citizens filibuster," similar to what pro-choice advocates attempted in the state of Texas earlier this year: thousands have signed up to testify in an attempt to run out the clock by talking the bill to death in the time scheduled for the Special Session.

More than 13 hours after House Representatives first sat down for public testimony on the same-sex marriage bill — they're still going, and with no end in sight.

Nearly 5,000 people have signed up to testify on SB 1, the "Hawaii Marriage Equality Act of 2013".  It's unclear how many people actually addressed lawmakers because around 9 p.m. Thursday the hearing started moving along quickly as legislators called upon numbers and no people stepped up.

Hours before the hearing even began, the line to testify was already wrapping around the auditorium.  At 9 a.m, more than 15,000 pages of written testimony were submitted and House officials say it continues to pour in.

The Hawaii House appears to be looking to Connecticut as a model:

The Connecticut Supreme Court ruled in 2008 that the state's marriage and civil unions laws violated equal protection because gay couples were denied the ability to marry, becoming the third state, after Massachusetts and California, to legalize gay marriage. Connecticut approved a law in 2009 implementing the court's ruling while adding a broad exemption to deal with religious liberty.

Previous Post: « Obama Advisers Furious That Biden Stole President’s Thunder on Gay Marriage: Book
Next Post: One Direction Goes Back in Time for ‘Story of My Life’: VIDEO »