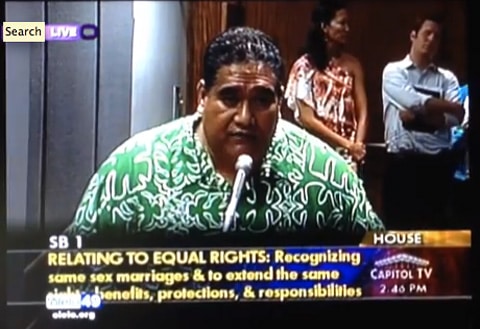 Tenari Maafala, the head of Hawaii's police union, is making headlines for his testimony before the House of Representatives yesterday in opposition to the marriage equality bill, Honolulu Civil Beat reports. "Maafala is president of the State of Hawaii Organization of Police Officers and an officer with the Honolulu Police Department," according to HCB.

Maafala said as a police officer he will observe all laws, but that will all change the day he retires:

Lawmakers have already heard from all 5,184 people who signed up, but they're making their way through a second wave of people who missed their chance to speak the first time their numbers were called. After getting all the way to testifier #3,200 tonight — officials decided to recess and will continue the hearing (Tuesda) at 10:30 a.m. with testifier #3,201. If possible, officials say they intend to complete decision making tomorrow. If they vote yes, it will advance the bill to the House floor for a second reading. If they vote no, it will kill the bill.

Previous Post: « Ralph Reed Calls ENDA ‘a Dagger’ in ‘the Heart of Religious Freedom’
Next Post: Is This the Hottest College Baseball Twerk Vine of All Time? — VIDEO »