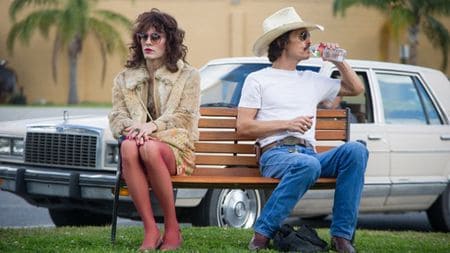 "Silence = Death" was a particularly genius political slogan for AIDS activists in the 1980s. Potently succinct, righteously angry, and, best of all, both literally and spiritually true. The conversations it prompted about systemic gay oppression, political complacency, the importance of frank sexual discussion, and gay liberation — particularly in regards to the fight against HIV and AIDS — surely saved countless lives. But isn't it a curious thing that HIV/AIDS in the arts and entertainments still remains so tied to gay-only narratives of roughly a ten year window from the early 80s through the early 90s? Time to tell new stories from fresh perspectives?

Enter DALLAS BUYERS CLUB, one of the first AIDS dramas (that I can recall at least) that is not about the gay community. Matthew McConaughey stars as Ron Woodroff, a hard-living homophobe electrician. When we first meet him he's having a drug-fueled three way with two women behind the scenes at the rodeo. While we're watching him getting it on, he's watching a man getting gored at the rodeo. This opening sequence arguably shoves the entirely less useful 'Sex = Death' argument in your face, but the film quickly finds its footing as an involving drama about a man who doesn't know what's knocked him out and also is too damn stubborn to stay down. 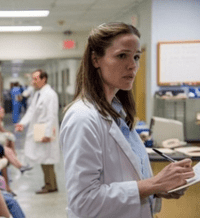 Woodroff's health rapidly deteriorates (McConaughey famously lost 40ish lbs for the role) and at a disorienting visit to the local hospital, he's informed by two doctors (Denis O'Hare and Jennifer Garner, playing unfortunately broad characters – let's call them "Bought & Paid For" and "Compassionate Soul") that he has the HIV virus. He reacts with angry homophobic slurs and informs the doctors that they're wrong. But one of the smartest details in McConaughey's emotionally detailed performance (he doesn't coast on the physical transformation) is that this feels less like true denial than a hostile attempt at saving face; deep down, you can see the horror of recognition since he knows it's true.

Once Woodroff has accepted the diagnosis the film shifts into something like a medical mystery / con-man drama as Woodroff partners up with a local transgendered woman Rayon (Jared Leto, also terrific) to form a "Buyers Clubs". Buyers Clubs were a little discussed but fascinating substory from AIDS history in which affected regional communities would sometimes form organizations to treat their diseases creatively without waiting on the FDA to release drugs trapped in the lengthy testing/approval processes. Loophole: You can't sell illegal possibly deadly / possibly life-saving drugs, but you can sell memberships to private clubs. And then your club members get "free" drugs. At first the medical establishment looks the other way but soon Big Pharma, with millions riding on the success of AZT, begins to target the Buyers Clubs and views Woodroff as a major thorn in their side if not quite a true threat.

The French-Canadian director Jean-Marc Vallée, best known previously for the slightly dull royalty drama The Young Victoria (2009) and a very feisty Canadian hit called C.R.A.Z.Y. (2005) about the gay son of a conservative family, lands somewhere in the middle with this new film in terms of its energy. He wisely steps back without a lot of visual fuss, often into medium shots, to let you see the astonishing physical commitment of the actors.

Both stars run with the opportunity, or strut with it in this particular case. Woodroff and Rayon are vain peacocks, albeit of different gender identities and sexual preferences. As the cowboy and the queer perform their separate ideas of Texas masculinity and self-identified femininity (Gender Studies majors, take notes!) they often bristle as they pass each other on their personal runways. McConaughey and Leto sell this tetchy friendship and messy business partnership with everything they've got from their rail thin bodies to their gaunt emotive faces. The film makes an interesting counterpart to Philadelphia (now 20 years old) in that though it again pairs a homophobic straight man with an out AIDS victim, it doesn't congratulate the homophobe for becoming "tolerant". This time it sits back impatiently waiting for him to stop being such an asshole!

Still, to both actors' credit, Woodroff and Rayon are never entirely reformed people. They are who they are, self-destructive and self-righteous, proud and loud. Their edges aren't smoothed over for simplistic hug it out uplift even when they're, uh, hugging it out. I'm sure there will be many people who are more well versed in AIDS treatments or history that may bristle at some elements of the movie or omissions from the plot, particularly in regards to its hospital sequences. I'll admit I was confused by the characterization of AZT as something of the film's boogeyman since most AIDS dramas I've seen treat it like a godsend. But in the end I accepted it under the broad umbrella of 'nobody knew what the hell was going to kill people or make them better and everyone was scared shitless').

In the end the medical procedural recedes anyway, leaving only the human drama. What emerges is not a boilerplate 'triumph of the human spirit!' biopic but a clear-eyed glimpse at defiance in the face of indifference, ostracization and death. I loved the arc that the film manages, transforming one of Woodroff's most unlikeable scenes (the diagnosis) into something you have to look back on with admiration. The same misdirected pride that had him lashing out like an ignorant bigot, is also fueling his outspoken fight for life. He won't be going quietly. 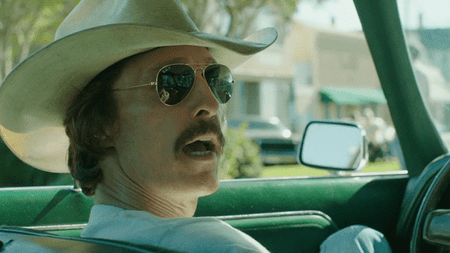