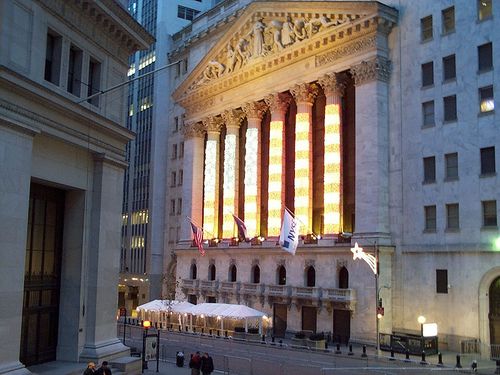 Earlier today, we reported on LGBT activists' efforts to protest a 'Russia Day' planned for this Monday at the New York Stock Exchange through a Change.org petition accusing the Russian government of “banning any gay-positive speech and tacitly encouraging violence against LGBT Russians.”

“American money should not be supporting a country that is terrorizing its gay community,” the petition stated.  On Monday, Sergey Belyakov, Russia's deputy minister of economic development, is scheduled to ring the closing bell at the New York Stock Exchange.

Today, however, the NYSE responded to the petition, and it's message was simple: we love gays, but we're not cancelling 'Russia Day.'  In a letter to Bert Leatherman, who started the Change.org petition, New York Stock Exchange Chairman Duncan Niederauer explained the organization's rationale for hosting the Russian event:

Events like “Russia Day” provide an opportunity to foster dialogue on a number of topics. In fact, it would not surprise me in the slightest if an attendee or potential investor were to express concerns over the issues raised in your petition. What we plan to do on Monday is to convene a forum for business leaders and other interested parties from across the globe to meet and discuss economic policies promoting entrepreneurship, financial market development and job creation.  In no way should this event be viewed as an implicit or explicit validation of any Russian government or social policies.

Check out the full letter from Niederauer, and a list of the NYSE's pro-LGBT policies, AFTER THE JUMP…

Thank you for your letter and petition raising these concerns to our attention. As i hope you would expect, we take these issues extremely seriously.  As I hope you are aware, the NYSE has been a longstanding and leading advocate for LGBT rights.

Events like “Russia Day” provide an opportunity to foster dialogue on a number of topics. In fact, it would not surprise me in the slightest if an attendee or potential investor were to express concerns over the issues raised in your petition. What we plan to do on Monday is to convene a forum for business leaders and other interested parties from across the globe to meet and discuss economic policies promoting entrepreneurship, financial market development and job creation.  In no way should this event be viewed as an implicit or explicit validation of any Russian government or social policies. We abhor discrimination of any kind and, consistent with many of the LGBT organizations with whom we have collaborated, believe we can make a difference through dialogue and engagement – sharing our experience that jobs, growth and sustainable development can only be achieved when opportunity is available to everyone, equally.

In closing, we are proud to have an active employee group that seeks to raise awareness and understanding within the company of issues relevant to LGBT employees.  We also have a long history of using the NYSE as a platform to raise public awareness and understanding of issues relevant to the LGBT community at large. Listed below, please find a list of all our recent activities around both employee and public engagement.

Thank you for bringing your concerns to our attention, and for permitting me the opportunity to reiterate theNYSE’s commitment to supporting equal rights for all individuals, regardless of sexual orientation.

NYX Pride & Allies
Established in 2007, NYX Pride & Allies is an NYSE Euronext employee resource group whose purpose is to encourage and leverage the contributions of NYSE Euronext’s LGBT and supportive employees; to help to raise awareness and understanding within the company of issues relevant to LGBT employees, the business community and the community at-large; and to support workplace fairness and the equal treatment of all employees, regardless of sexual orientation.

Post DOMA Panel Discussion and OPEN Finance Leadership Awards
On November  11, 2013, NYX Pride in partnership with OPEN Finance presented a moderated panel discussion on the Supreme Court repeal of the Defense of Marriage Act (DOMA).  Fourteen Wall Street and professional services firms signed an amicus brief in the case of Windsor v. United States which examined the business case for marriage equality, setting forth the argument that DOMA created unnecessary costs and administrative burdens for both employers and employees by forcing employers to consider married same-sex employees differently from their heterosexual counterparts.  Attended by over 300 business professionals, the panel included Roberta Kaplan, the attorney who argued the Windsor case, Evan Wolfson of Freedom to Marry, Fred Sainz of Human Rights Campaign, and was moderated by author Andrew Solomon.  OPEN Finance, a volunteer network of LGBT leaders in financial services, presented awards to 14 firms that gave support to the brief that led to this historic moment in LGBT civil rights history.  NYSE produced and hosted the panel discussion event and a cocktail reception on the trading floor.

The Trevor Project
On June 20, 2013, representatives from The Trevor Project rang the Opening Bell to highlight the Trevor Live 2013 NY Gala.  The Trevor Project is the leading national organization providing crisis intervention and suicide prevention services to lesbian, gay, bisexual, transgender and questioning youth.  It provides life-saving and life-affirming resources including our nationwide, 24/7 crisis intervention lifeline, digital community and advocacy/educational programs that create a safe, supportive and positive environment for everyone. The Gala brought together top entertainers and corporate leaders to support the organization’s life-saving, life-affirming work for LGBTQ youth in crisis.

Anti-Bullying Panel Discussion
On May 17, 2013, the NYX Pride ERG co-produced with other employee resource groups an anti-bullying Panel Discussion for NYSE employees which engaged experts from the Trevor Project, End to Cyber Bullying (ETCB) and the New York Civil Liberties Union in a discussion on how to identify, prevent and stop bullying of all kinds and provide support to young people who might be in a bullying situation.

AIDS Walk New York
With a Bell Ringing on May 11, 2013, NYSE provided promotion and visibility to the 27th annual AIDS Walk New York benefitting Gay Men’s Health Crisis and 41 other important tri-state area AIDS service organizations.  Since 1986, AIDS Walk New York has raised more than $133 million for HIV programs and services in the tri-state area, and has grown into the largest AIDS fundraising event in the world. In 2013 alone, 30,000 participants, many of whom were members of more than 3,000 corporate and community teams, raised over $5.5 million for AIDS service organizations.  NYSE Euronext has provided support and visibility to the AIDS Walk in this way since 2009.

PFLAG’s Straight For Equality Awards
NYSE was a sponsor of PFLAG’s Straight For Equality Awards on April 4, 2013.  The Straight for Equality Gala aims to honor and celebrate some amazing straight allies whose selfless support of the LGBT community truly embodies the spirit of Straight for Equality and PFLAG.  It is the only national event dedicated to honoring the contributions of straight allies working to move equality forward for their GLBT friends and family.  PFLAG is a national non-profit organization with over 200,000 members and supporters and over 350 affiliates in the United States.  NYSE Euronext has been a PFLAG sponsor since 2009.

God's Love We Deliver Volunteerism
NYX Pride, the NYSE's LGBT Employee Resource Group, joined with other financial services firm employees on March 21, 2012 to prepare meals for God's Love We Deliver, a New York City nonprofit organization that improves the health and well-being of men, women and children living with HIV/AIDS, cancer and other serious illnesses by alleviating hunger and malnutrition.