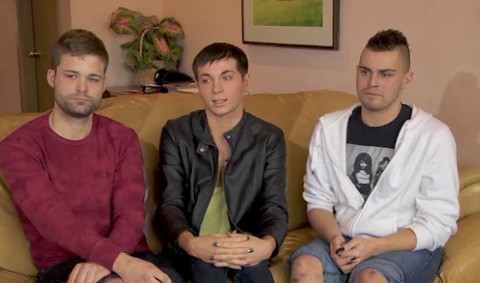 Three gay men who were out in Portland, Oregon in drag on Halloween night were beaten, KATU reports:

It all happened around 2 a.m. along the waterfront in downtown Portland. The men – Dustin Miller, Joey Malone and Curtis Hughes – say they heard some familiar slurs from a group of about five people and then things turned violent.

One of the men kicked off his heels and used them as weapons to try to defend himself. The men say between the high heels and a cyclist passing by, the attackers got spooked enough to run off. But the three were left bleeding, banged up and wondering what had just happened.

They admit their costumes were provocative and some people might have been offended, but said they didn't expect to get beat up over it. They did file a police report, but know there is a slim chance the attackers will be caught.

Thankfully, the three men are getting a lot of support from their community, including money for dental work.

Previous Post: « Is This the Hottest College Baseball Twerk Vine of All Time? — VIDEO
Next Post: South Carolina Sees Major Shift Toward Acceptance of Gay Marriage in New Poll »