In response to Ikea's decision last week to remove a story about a lesbian couple from the Russian edition of its magazine, a group of Russian gay couples staged a "guerrilla photo shoot" inside a Brooklyn Ikea over the weekend. The Huffington Post reports:

The photo shoot was organized by Joseph Huff-Hannon, co-editor of the forthcoming book Gay Propaganda: Russian Love Stores, Alexander Kargaltsev, a gay Russian artist and photographer who was recently granted asylum in the U.S., and Rusa LGBT co-founder Nina Long.

"Ikea calls themselves the 'life improvement' store, but we decided they have some major room for improvement after they deleted a lesbian couple form the Russian version of their catalog," Huff-Hannon told HuffPost Gay Voices in an email. It's a cause particularly close to Huff-Hannon, as his boyfriend, Artyom Matusov, was born in Moscow: "Ikea should stop insulting their LGBT customers in Russia and around the world, show some backbone, and publish the story in Russian."

Check out video and more photos from the protest shoot, AFTER THE JUMP… 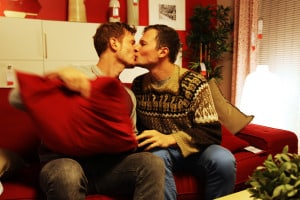 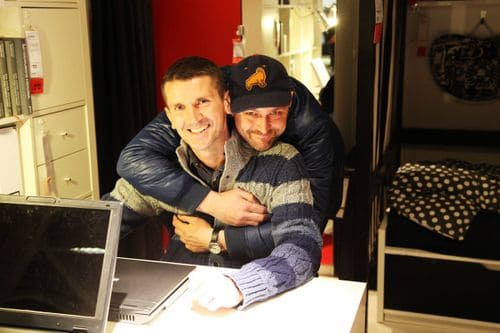