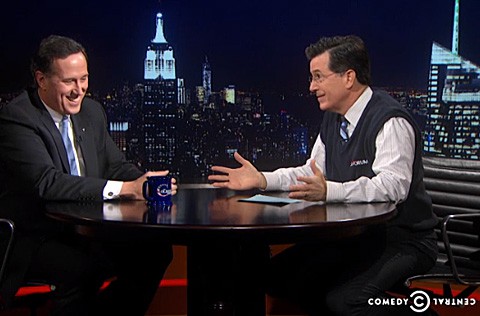 "We're losing this one, aren't we?" Colbert asks. 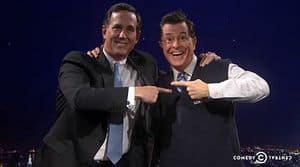 "Marriage has slipped away from us," says Santorum. "Marriage has devolved into just a romantic relationship between two people, and that's not what marriage is."

"It's for transferring property," Colbert adds.

"But marriage is more than that, and heterosexuals have lost the definition of marriage so it's not surprising that other people want to see 'well this is all marriage is today, and so we should be involved in that'. The better debate is to talk about what marriage is and try to reclaim the institution as a man and a woman coming together to have children and raise them in a way that continues society."

Asks Colbert: "What if we just say…gays you can have marriage. Because at this point marriage is something that seems kind of gay!"

Santorum then froths on about children needing a mother and a father, and chooses not to respond to this barb from Colbert:

"What if they have mother and no father? Wouldn't it be better for them to have no parents than to be loved by two gay people?"