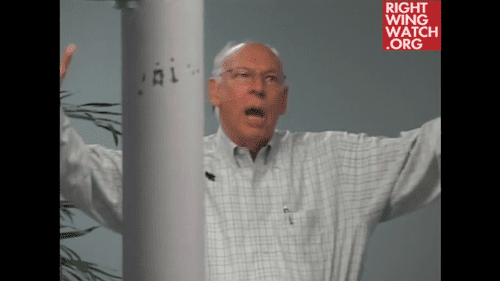 Rarely does a week go by when Senator Ted Cruz (R-TX) doesn't do or say something that riles up Washington and cements his place as the Tea Party's poster boy. Yet more recently it has been his father, pastor Rafael Cruz, who has grabbed the headlines for birther comments made at a Tea Party meeting in which he stressed the need to send Obama "back to Kenya."

But Rafael Cruz's birther beliefs are just one small part of the craziness that goes on in that head of his. Right Wing Watch has complied a treasure trove of video footage of the man spouting off about everything from the evils of evolution, to his belief that Obama thinks he's God and Satan controls the government, to his assertion that gays stole the word "gay" and endanger children.

In one of the more bizarre clips, Cruz makes the claim that same-sex marriage is really just a communist ploy to destroy the family and spread the evil lie that is evolution.

"You know communism or socialism, whatever you want to call it, what is happening in this country is not different than what happened in Cuba; the procedure might be different they may be a little slower, but it's the same thing. It is about government control of your lives. You got to realize how Marxist, how socialism works. We need to understand the issues. When you hear all these things about homosexual marriage, this has nothing to do with homosexual rights. Did you know that? The whole objective is the destruction of the traditional family, it has nothing to do with homosexuals, they could care less about homosexuals, they want to destroy the family. You need to understand, it's just like evolution. You know most Americans have their head in the sand about evolution. I've met so many Christians that tell me 'evolution is a scientific fact.' Baloney! I am a scientist, there is nothing scientific about evolution."

In another speech, given at a Baptist church in Irving, Texas in June, Cruz went into detail about his claim that gay people are a threat to kids and suggested that gays will join the Boy Scouts of America to sexually assault children:

"I was a Boy Scout, most of the times when you went out camping the tents were for two kids, I certainly don't want my child with a potential sexual predator sleeping next to him," he said.

More than a little disheartening to know that one of our nation's more prominent lawmakers was raised under this guy's roof. And unfortunately the apple didn't fall very far from the tree…

Check out these and other ramblings of this zealous nutjob, AFTER THE JUMP…