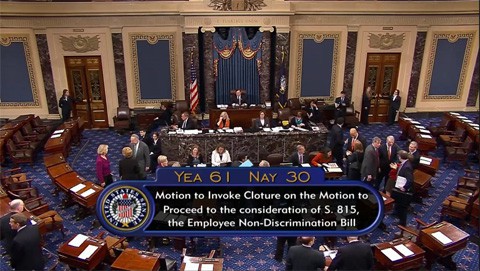 The Senate has approved the Employment Non-Discrimination Act, invoking cloture in a 61-30 vote. The final debate and vote will likely come later this week.

On the Republican side, Senators Ayotte, Collins, Hatch, Heller, Kirk, Portman, and Toomey voted in the affirmative.

The fight in the House of Representatives will be tough. More on that HERE.

The President welcomes the Senate’s bipartisan first step towards final passage of S. 815, the Employment Non‑Discrimination Act of 2013.  He has long supported an inclusive ENDA, which would establish lasting and comprehensive Federal protections against employment discrimination on the basis of sexual orientation or gender identity.  He thanks the lawmakers from both sides of the aisle who have stood up for America’s core values of fairness and equality, and looks forward to the Senate’s consideration of ENDA.  He also encourages lawmakers to ensure that the legislation remains true to its goals as it is considered.