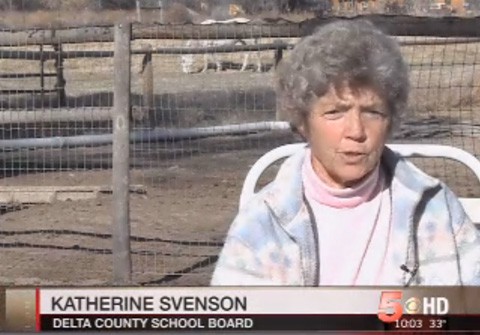 Katherine Svenson, a school board member in Delta County, Colorado, is making headlines for statements she made at a board meeting demanding that transgender students be castrated before they are allowed to use the women's bathroom, KREX reports:

"One of the board members said that she had gotten comments from my district, that the people are very unhappy with me commenting, they're very abashed about what I said," Svenson said. Svenson passed out an issue of the Education Reporter during the October meeting, and said: "I would like to pass out something that shows people what is going on in the rest of the country. Massachusetts and California have passed laws relating to calling a student, irrespective of his biological gender, letting him perform as the gender he thinks he is, or she is. I just want to emphasize, not in this district. Not until the plumbing's changed. There would have to be castration in order to pass something like that around here."She stands firmly by her statements.  "I don't have a problem if some boys think they are girls, I'm just saying as long as they can impregnate a woman, they're not going to go in girls locker-room," said Svenson. She says she brought the issue up in order for other board members to be aware of the issues that could be coming to Colorado very soon.

Watch KREX's report, AFTER THE JUMP…