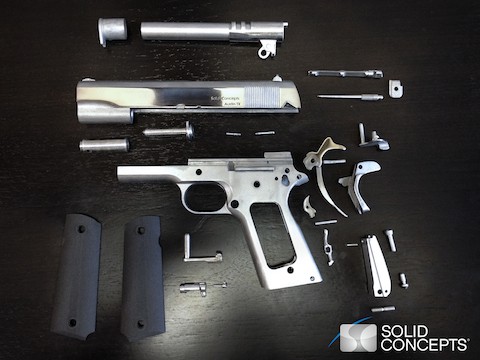 We covered a story six months ago about University of Texas student Cody Wilson 3d-printing his very own fully-functional handgun. It was scary, particularly given that the thing was entirely plastic and would contain no traceable details such as a serial number and could easily be mistaken for cheap toys from Walgreens, but at least they would suffer catastrophic failure after just a few shots.

Not to be outdone by a college student, Austin-based industrial 3d print house Solid Concepts has successfully printed a metal handgun that is accurate to 30 yards and can fire 50 shots without breaking (though thankfully not all in one magazine). Solid Concepts stressed that home 3d printers are not capable of printing the gun they designed, that it requires the use of a heavy-duty industrial printers that are too expensive for an individual. Nor do they plan to release the plans online the way that Cody Wilson intended to do. While these are mildly reassuring facts, all it will take is one resourceful gun nut to start printing unregistered and potentially untraceable weapons that could do a great deal of harm.