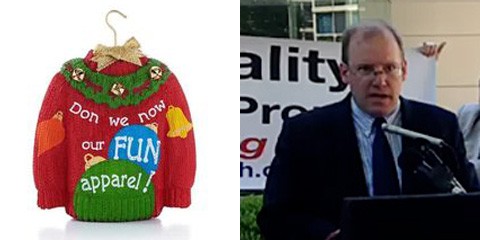 We know what Americans for Truth About Homosexuality wingnut Peter LaBarbera is trimming his tree with this year.

"Who could blame Hallmark for changing the Christmas carol from 'Don we now our gay apparel' to 'Don we now our fun apparel' because homosexual activists stole the word 'gay.' It used to mean 'happy' and 'joyful' – and now it means, basically, identifying a sexual perversion: homosexuality. So I don't blame Hallmark for making this change. Homosexual activists stole that word just like they stole the rainbow. Now, I don't believe we should let these words go, but it looks like 'gay' is too far gone. We're not going to let the rainbow be used solely as a homosexual symbol, so we're going to fight that. But the fact is, homosexual activists are constantly stealing good things and adapting them to suit their sexual perversion."