LGBT organizations All Out and Athlete Ally have partnered with American Apparel in the creation of Principle 6, a new line of merchandise that aims to use the Olympic committee's very own charter language as a way for consumers to stand in solidarity with gay Russians, athletes, and visitors during the upcoming Sochi Games. The New York Times reports: 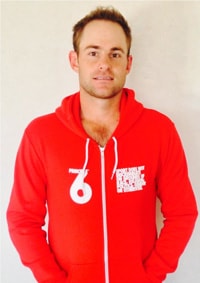 The proponents of the Principle 6 campaign say it can be effective because it will avoid the Olympic commtitee's strictures against political statements or demonstrations by using the committee's own language as a rallying cry for nondiscrimination. The line of Principle 6 branded merchandise will bear a rewritten version of the principle's declaration: "Sport does not discriminate on the grounds of race, religion, politics, gender or otherwise." (The paraphrase also serves to avoid another sticky issue: The Olympic committee is zealous in its policing of the use of the words "Olympic" or "Olympics" by anyone other than its members and official sponsors.)

Andre Banks, executive director of All Out, said the merchandise "allows us to deliver the Principle 6 message on a scale that would make the campaign incredibly powerful."

American Apparel is to sell the merchandise online, beginning early Monday morning, and in stores around the world, beginning on Jan. 1. The line will include T-shirts, hoodies, hats, bags and underwear. The proceeds from the sales of the merchandise, minus the costs, "will go to benefit Russian LGBT groups in St. Petersburg and Moscow," Mr. Banks said.