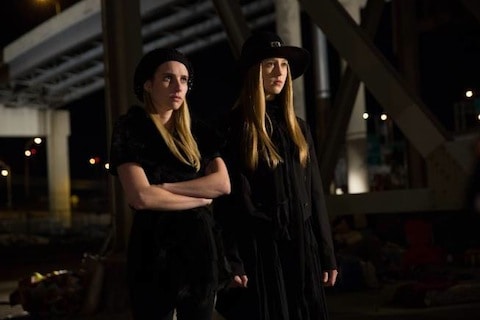 Welcome back! Here's hoping your Thanksgiving spread was better than Fiona's styrofoam and raisin stuffing. Since we last left our witches, Fiona (Jessica Lange)'s health has continued to deteriorate, but her relationship with the Axeman (Danny Huston) keeps blossoming. Her daughter Cordelia (Sarah Paulson) is fired up by the loss of Queenie (Gabourey Sidibe) to the Voodoo Queen (Angela Bassett) and recommitted to uniting the coven under a new Supreme. Despite all her rage, LaLaurie (Kathy Bates) is still just a racist in a cage at Laveau's salon.

After spending the first few episodes unfurling these multiple storylines, tonight's episode, "The Sacred Taking," starts to bring some of our disparate plots together and forces our characters to make some pretty big decisions.

How will their choices play out? Read on to find out who lives, who dies, who's undead and who's lost their head, AFTER THE JUMP …

Let's start with Fiona's lament. And oh how she laments. Look, I'm not trying to be insensitive to her plight, but, I don't know, it's just not the most compelling viewing. All the writhing and hair clumps and solemn looks in the mirror are like the antithesis of all the fun villainy and drama that viewers fell in love with during this season's first few episodes. It's all so bleak. And it's not like she's having any heavy-hitting emotional epiphany. She's just sad she wasn't a better mother to Cordelia, and sad that her looks have devolved from Samantha to Endora (which isn't even that great of a read, since everyone knows Endora was amazing). Anyway, I could go on about Fiona and the drudgery and the empty promises from the Axeman she's continuing to schtup, but you get the idea. She's sad. Sad and dreary.

The rest of the coven doesn't have the luxury of moping. They've got a murder to plot. Before they work out the details, they're visited by none other than Misty Day (Lily Rabe). Misty was awakened one night by a mostly rejuvenated Myrtle Snow (Frances Conroy). They were visited by Delia's witch-hunting hubby (Josh Hamilton), who was stepped on Myrtle's face while circling the cabin with a shotgun. Off to Miss Robichaux's Myrtle and Misty flew in a flash, and now here they are seeking asylum. (And Myrtle is dishing on her North Korean bulk wig hook-up.)

With the appropriate quorum or whatever, the witches, including Myrtle and Misty, invoke the Sacred Taking — a ritual designed to transfer powers to a new Supreme when the former Supreme volunteers to kill herself. It was first invoked by the Salem witches when the Supreme had the consumption and couldn't lead the coven away from the trials in Massachusetts. She drowned herself in a well, and the new Supreme led the witches to New Orleans (as Myrtle reminds us, "Without a proper charcuterie platter or a bidet, absolutely savage!"). But however will they get Fiona to volunteer her life?

What follows is sort of like a Dickensian visit from three spirits, trying to show a weakened Fiona what a scrooge she's become.

First, our ghost of Witchmas Present, Madison (Emma Roberts), reveals herself to Fiona as being very much alive and ready to claim her place as Supreme. She convinces Fiona that she resurrected herself before laying out how this is all going down. Either Fiona will be burned at the stake for what she did to Madison, or she could just peacefully take this handful of pills and drift peacefully off to sleep. Her call.

Our second "spirit," Myrtle is next to appear with a glimpse into Fiona's future. Fiona might think she can run off to a secluded island with the Axeman as he diligently caters to her every whim at her side, but Myrtle paints a different picture. "You will die the same way you lived your life: Alone and disappointed by everyone," she tells Fiona. Yikes. That's enough for Fiona to be inspired to dress up in her best Norma Desmond turban and ready herself to die. She takes the handful of pills and lies down, drifting off into that eternal sleep …

… Until she's awoken by an important figure from her past (and the only real spirit in the mix) Spalding (Denis O'Hare). He fills her in on what's really at play. Madison is not the Supreme, it's Misty the swamp witch who has been bringing back the dead. This was all a conspiracy to take her down. So he gives her some ipecac and she vomits up all the suicide pills. She vows to avenge his murder, once she's done avenging her own, of course. While all this plotting and planning is taking place, Nan (Jamie Brewer) begins to wonder if maybe she's the next Supreme. The other girls are less convinced, so she heads over to Luke (Alexander Dreymon)'s house. Go on, girl, you don't need those jealous witches.

Luke hasn't had a great day. First his mom gave him some sort of Ajax enema, and then she locks him in the closet. (A call back to Brewer's season one character Addie and her mother's closet of horrors?) Nan uses a previously unseen ability to open the neighbors' door with her mind. Then she unties him, and the two lovebirds head out to the door, only to be stopped by Luke's evil mother (Patti Lupone). Before she has the chance to cause any more damage, she's shot by the witch hunter outside, who then shoots Luke as well. Oh no! He's too pretty to die!

The shots attract the attention of the witches next door. Fiona gets Misty close to Luke's mother's body so she can demonstrate her power. Misty brings the mother back, but then immediately passes out. Maybe there's more to Miss LuPone's character than it originally seemed. Luke's handsome fate is less clear as Nan rides along with him to the hospital.

Madison and Zoe (Taissa Farmiga) aren't much luckier in love. Their undead teenage polyamorous triad with FrankenKyle (Evan Peters) isn't 100 percent a success. While Zoe is breaking ground with her innovative Zombie Hooked On Phonics program to get him to speak, Madison seems content to just use FrankenKyle for the sexytimes. That's why she shouldn't be so surprised when she overhears FrankenKyle telling Zoe that he loves her. 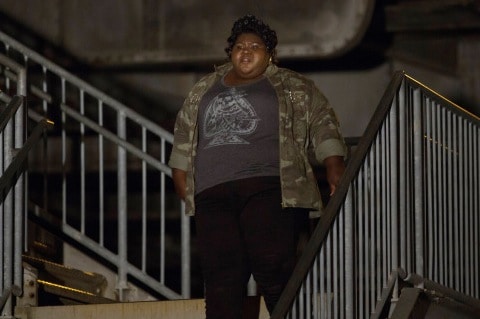 Meanwhile, things don't seem all cheery for Queenie (Gabourey Sidibe) over with Marie Laveau (Angela Bassett). First, Queenie is sent out to retrieve a dark heart, so she heads under the freeway overpass to stone cold murder a vagrant who has been raping young girls. Zoe and Madison catch her in the act and don't know how she do the voodoo that she do with all the murder and heart-snatching. Queenie explains to them that a war is coming and she's sticking with the voodoo witches who promise her more power.

She goes back to Laveau's base with a special fast-food treat for the captive LaLaurie (Kathy Bates). It appears that Queenie is still feeling a little torn between her former friendship with LaLaurie, and her allegiance to the Voodoo Queen. Laveau doesn't exactly appreciate her generosity. LaLaurie gives Laveau a little sass about how, really, what's Laveau going to do, kill her? So Laveau chops off LaLaurie's hand. Just because she can't die, doesn't mean she can't suffer.

Back at Miss Robichaux's, Cordelia and Fiona are bonding, which may sound strange given the recent events and the murder plot and all that. You see, Fiona is impressed with Cordelia and the girls' cunning, and Delia is happy to have her mother around to deal with the witch hunter that's after them. See? Good communication is all it takes to make a relationship work. And murder plots. Lots of murder plots.

Their sunny little chat is interrupted by a delivery. Fiona grabs the box, and opens it to find not a tasteful bouquet of fruit arranged like flowers. Oh, no. Instead it's the severed head of Madame LaLaurie! And it's still speaking!

Next week: The Salem witches ask for Laveau's assistance, and Cordelia's husband is running out of time to complete his mission.

What did you think of tonight's episode? Are you as excited to see Fiona become a less mopey Head Witch In Charge? Who do you think is the next Supreme?